Review: The Lions Rampant - It's Fun To Do Bad Things 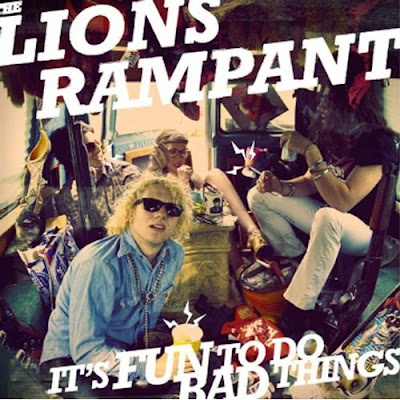 The Lions Rampant - It's Fun To Do Bad Things
2010, Deep Elm Records

Burlington, Kentucky’s The Lions Rampant go for a deep old school vibe with blues-based party time rock n roll on their debut album It’s Fun To Do Bad Things, due out April 6, 2010 on Deep Elm Records. Recently nominated for Best Rock Band and Best Live Act in the Cincinnati region; The Lions Rampant put on an electric live show of highly melodic garage rock. Stuart Mackenzie (vocals/guitar); Nick Vogelpohl (bass/vocals) and Nate Wagner (drums) are joined by a cast of friends on It’s Fun To Do Bad Things, capturing at least some of the energy the band exudes live.

It’s Fun To Do Bad Things opens with “Give Me”, with garage rock and punk blending in loud and unrefined tones. The song is highly repetitive on the lyric side but a fun listen. “I Need (Your Love)” is catchy, danceable rock n roll with a messy age, 1960’s style. “Kara” has an almost Van Morrison feel to it with a big, buoyant melody line. It’s a nice, simple love song that sounds both sincere and innocent. The Lions rampant gets back to the danceable rock n roll on “Shake It Out”, a party waiting to happen. “It’s Fun To Do Bad Things” sounds like a great song for a bar or party. The organ and horns over guitar, bass and drums works well in this messy-but-catchy tune, but doesn’t carry the sort of energy or vitality one might expect in a live setting. “Leave Me Alone” is sonically entertaining but much too repetitive. “All Night RNR” is the best track on the disc, a bouncy tune best served as an encore in a club. It’s Fun To Do Bad Things closes with “Cigs & Gins”, an interesting bit of bounce and slam that lacks substance.

It’s Fun To Do Bad Things is an uneven but mostly pleasing rock ‘n roll experience. The Lions Rampant may not garner a reputation for musical complexity, but they know how to turn out good time rock music. From a lyrics perspective, the songs on It’s Fun To Do Bad Things are a bit short on substance. Repetition gets used to mask a lack of complexity or extended thought on a few too many occasions, but the sort of garage/melodic punk music The Lions Rampant is intended to be more of a visceral than an intellectual experience anyway. This is good music for a Saturday night.

Rating: 3 Stars (Out of 5)
You can learn more about The Lions Rampant at http://www.thelionsrampant.com/ or www.myspace.com/thelionsrampant. It's Fun To Do Bad Things drops April 6, 2010, but is already available as a download via Amazon.com.
Posted by Wildy at 6:51 AM

Those guys are so funny. Once I had heard that one of them likes invest his time finding more about Viagra Online than make some other things.