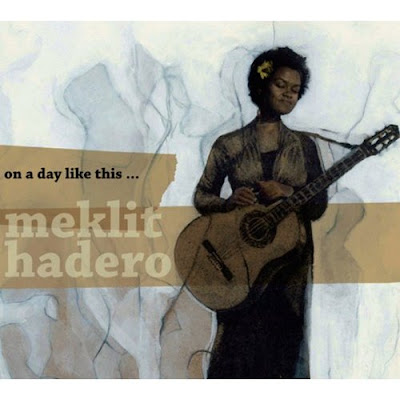 Meklit Hadero - On A Day Like This
2010, Porto Franco Records

San Francisco singer/songwriter Meklit Hadero chose the vibrant arts center as home like a moth chooses the light. She could have gone nowhere else. Born in Ethiopia and raised in the US, Hadero brings a wealth of cultural influences to her writing and recording, a plethora that is only enhanced by the multi-cultural stew that is San Francisco. Hadero began performing publicly in 2005, and quickly threw herself into writing while working as co-director of San Francisco's The Art House. Hadero's writing comes to full fruition on her upcoming debut album, On A Day Like This, due out April 20, 2010 on Porto Franco Records. Featuring some of the pillars of the San Francisco music community in supporting roles, On A Day Like This establishes Hadero as the Left Coast's answer to Norah Jones.

Hadero brings a warm, inviting voice to On A Day Like This, opening with “Walk Up”. Dappled with strings, “Walk Up” is a watercolor in music where Hadero paints the elements of her song with a poetic mastery that’s awe-inspiring. Hadero’s approach is low-key ala Norah Jones, but there’s significantly more sonic experimentation in the margins. The song is unique and intriguing and sets the stage well for the rest of the album. “Float And Fall” is a catchy little jazz number that will be rumbling around in your noggin for days. “Leaving Soon” finds Hadero experimenting with the sound of her voice against the background of a solid tune; the effect is enthralling and will have you hitting repeat to hear it again and again.

Hadero offers up a sociolinguistics lesson on “You And The Rain”, reminding us that many cultures do not define such a complex phenomena as rain with a single word. The instrumentation of “You Are The Rain” carries a quirky gentleness that’s highly entertaining and enjoyable. “Feeling Good” blends from African into Western style with a highly simplistic lyrical base, but Hadero’s voice is at its most striking here. "Soleil Soleil" keeps simplicity as its focus, but the dance tune has some interesting sounds going on in the arrangement that will intrigue the musicians in the crowd. “Walls” is the best all-around song on the disc. It’s also the one you’re most likely to dislike on the first listen through On A Day Like This. Hadero’s voice as it’s most enigmatic here; this may not sit well on first listen, but the more you hear the song it will grow on you. Meklit Hadero’s voice carries a fascinating beauty through the vocal line, but it’s a beauty you may need to shift your perspective to hear fully. On A Day Like This closes out with the ambient jazz study of “Under”. It’s a decent enough tune but a bit anti-climactic as a closer.

Meklit Hadero is distinctive, with a voice that lulls, intrigues and occasionally even makes you step back and figure out what she’s doing. Some of it is in the blending of cultural styles, and some of it is simply having an unusual tonal mix ala Sarah McLachlan. On A Day Like This offers a true blending of styles and cultures, taking risks that aren’t really risks at all, and opening up the spectrum of pop music to sounds that aren’t often heard on Western stages outside small communities in large cities. Hadero is distinctive enough and talented enough to become more than a regional act. On A Day Like This is good enough to establish Hadero as a national act, assuming the right break comes along. Takes some time to get to know Meklit Hadero; one down the road you can lord it over your friends that you were in on the secret before everybody else.

You can learn more about Meklit Hadero at http://www.meklithadero.com/ or www.myspace.com/meklit. On A Day Like This drops on April 20, 2010. You can pre-order the album as either a CD or Download from Amazon.com.
Posted by Wildy at 5:30 AM

I am completely in love with Meklit Hadero's album. I hope to see much more of her work soon!