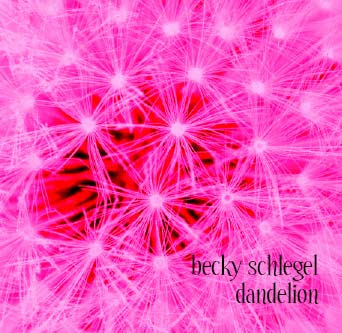 When we reviewed Becky Schlegel’s fifth album, For All The World To See two years ago it was a revelatory experience. Schlegel showed the poise and talent of an old-school country performer. On April 6, 2010, Schlegel returns with her sixth effort, Dandelion. The expectations are high considering Schlegel’s last effort and the level of talent she displayed. While Dandelion does have some nice moments, it doesn’t live up to For All The World To See.
Dandelion opens with “Anna”, a sorrowful view of grief from the third person perspective. Schlegel the narrator tells us about someone who still talks to her deceased husband in the dark of night; a solid story song that tells us love survives even death. The title track, “Dandelion” is a mildly plodding affair with interesting minor key vocal harmonies, but Schlegel actually manages to sound whiny on the lead vocal. “Colorado Line” is all about looking back on a great love of our youth and longing for yesterday. Schlegel sounds a lot like Dolly Parton here in one of the better songs on the album. Schlegel’s energy runs flat across “Nowhere Bound”, “I Never Loved You Cowboy” and “I Never Needed You”, where she seems to lack the courage of her convictions.
“So Embarrassing” is one of the high points of the album, with the narrator having left home for a time because her man has been cheating. She’s cleared her head and returned home for one more try to find him with someone else. “So Embarrassing” is all about the moment of indecision as she stands on the front porch trying to decide what to so. The songwriting is brilliant, although Schlegel’s resigned performance lacks the emotional investment the song implies. “When It Rains” is a nice piece of songwriting about being in love with someone whose life is on the road. It’s a “stolen moments” concept that plays well with Schlegel’s voice. “Reunion” plays like an Epilogue to “Colorado Line”; a decent love song that perhaps strays a bit too far into the realm of syrupy cliché. Schlegel closes with “If I Were A Poet”, the best songwriting on the album. There’s nothing contrived here, just Schlegel working to be herself, and the result is the most authentic recording Schlegel has to offer to date.
Becky Schlegel presented in 2008 as one of the bright new lights in Nashville. While Dandelion would seem to be a step backward, it seems more likely to be a case of slump than an indication that For All The World To See was lightning in a bottle. Schlegel still has a darling of a voice, although it’s not always put to best use on the songs selected for Dandelion. Schlegel’s path to Nashville stardom lies in being herself, not in being the projection of some producer’s idea of what she should sound like. Dandelion is decent enough on its own, but pales in light of Schlegel’s earlier work.

You can learn more about Becky Schlegel at http://www.becky.bandvista.com/ or www.myspace.com/beckyschlegel. Dandelion drops on April 6, 2010, but you can buy it now through Schlegel's web store!
Posted by Wildy at 5:30 AM