Review: Babylon Mystery Orchestra - The Godless, The Godforsaken And The God D@mned 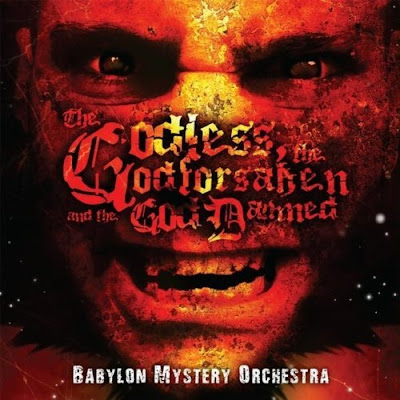 The Godless... opens with "Catspaw", where Johnson takes to task those in the arts who supported Barack Obama and fellow democrats in the 2008 election cycle but who fail to call him on his failures as president. Johnson sees the current administration as having too much power and control over the governed, and chastises his fellow artists for failing to see and/or point this out in their role as observers. "Benai Elohim" (Sons Of God) is a biblical reference to the fallen angels; Johnson's exploratory explanation for the true identity of those behind what we call UFOs. Johnson plays on Judeo-Christian end time prophecies and the concept of spiritual warfare to frame the argument in song.

On "A Constitutional Right" and "Jesus Save", BMO takes on abortion. "A Constitutional Right" alternates between the perspective of those who claim the right to abortion as an absolute and the perspective of what actually happens to the unborn child in the process of abortion. Whether factually correct or not, the images Johnson conveys are brusque and disturbing. On "Jesus Save", Johnson takes on the role of Satan, encouraging people to choose themselves over their children to break the bond of motherhood forever. In Johnson's reckoning, the resulting tears of angels are gasoline that powers the fires of Hl. BMO turns their attention to social engineering on "Hate Crime", skewering those who try to create social equality by creating an uneven playing field. Johnson minces no words in asserting, "In the game of false oppression the victim always wins."

BMO takes on the evils of communism in "Viva Cristo Rey!" (Long lives Christ The King); reviving the old argument that communism is its own religion in which the state is god. Likewise, in "'We' Is Killing 'Me'", Johnson rails at communism and its effects on human freedom ("Organize the weak, sacrifice the free"). BMO takes to task leaders and those of influence who wield their power unguided by faith, and takes on the role of Satan once again in "You're On Your Own This Time". This dark tune tells mankind that they've turned away from God so often that they are now left to their own devices. BMO closes with the dark and oppressive "The Twelfth Time", seeming to lose the overarching message of the album in a sonically solid but out of context ending.

Babylon Mystery Orchestra isn't out to make friends on The Godless..., instead engaging on a mission to educate others in the philosophy of its songwriter, Sidney Allen Johnson. The thoughts and ideas will appeal to conservatives everywhere, even if the lyrical style and Goth Metal arrangements might be a bit out of context at the meeting of a conservative think tank. From a pure songwriting perspective, The Godless... is a mixed bag. It's clear that BMO is more about message than pure songwriting, but the final product is intriguing and is likely to gain a foothold with metal fans that aren't averse to the messages contained therein.