Review: Wes Tucker & The Skillets - The Scorpion And The Dove 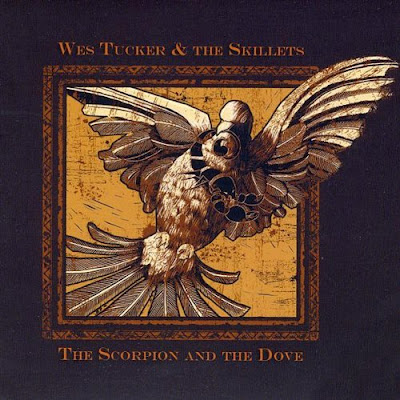 Wes Tucker & The Skillets - The Scorpion And The Dove
2009, Wes Tucker

Mainstays of the Washington, D.C. indie scene for the past five year, Wes Tucker & The Skillets have won several local awards and have earned a reputation for their dynamic live shows. With a sound that's instantly familiar yet fresh, the band makes new fans whenever they take the stage. On their sophomore effort, The Scorpion And The Dove, Wes Tucker & The Skillets capture a vibrant energy that's a mix of melody, poetry and the pure enjoyment of the band to be making the music they are.

The Scorpion And The Dove opens with "What You Stole", a cautionary tale about not being able to get back what you give away. Listeners may note a vague similarity to Hootie & The Blowfish, in large part because of the soulful voice of Wes Tucker and a sound that wouldn't have been out of place on the Carolina frat circuit in the mid-1990's. "Let It Ride" is a straight-up country tune; a secular song about faith and moving on when things go wrong. Tucker shows a wonderful touch with lyrics here, couched in a subliminally catchy melody and arrangement. "Three Yellow Roses" shows how good a lyricist Tucker is "no matter how long the story we're defined by where we begin", and the smooth arrangement matches his poetry perfectly.

Tucker gets philosophical on "The Scorpion And The Dove", a song about mankind's tendency to self-destruct through conflict with one another. The song references prophecies about the end of the world while asking if prophecy is a necessity or simply the end road of one path; asking whether we can change. "Good To Go" shows a more powerful rock sound and features some of the best solo guitar work on the album. It's a very enjoyable listen that will appeal more to classic rock fans. "Sad And Proud" is all about needing one another to get by. The southern rock/Americana arrangement will perk up some ears, and the message is a positive one.

Tucker's muse turns more firmly to love for the rest of The Scorpion And The Dove, although that's been the underlying theme from the start. "Beloved One" is a song of love, devotion and thanks. It reminds us that sometimes we are not so much saved so much by our own faith but by the faith of another; a wonderful sentiment in a joyously mellow Americana arrangement. You'll want to get your dancing shoes of on "Let Me Know" as Tucker brings the funk on a tune guaranteed to move your feet. "Take It Slow" is all about the need, sometimes, to step out of the world and tend to the one you love. It's a potential mix-tape star. "Worry Stones", however, is likely to end up as a wedding song. It's a highly artful and poetic song about faith and love, and the power the two have to change lives. "Worry Stones" is a love song first and foremost, but avoids syrupy cliché. The Scorpion And The Dove closes out with the rhythmic acoustic guitar of "Quick Strike", a stripped down tune that allows Tucker to show off his poetic side one last time before saying goodbye.

The Scorpion And The Dove is a striking album; you'll walk away from your first listen feeling like you've been listening to it for years. Wes Tucker has crafted the sort of album that you'll go back to again and again.

You can learn more about Wes Tucker & The Skillets at http://www.westucker.com/ or www.myspace.com/westucker. You can purchase The Scorpion And The Dove as either a CD or Download from Amazon.com.
Posted by Wildy at 5:10 AM

Labels: Hootie and the Blowfish