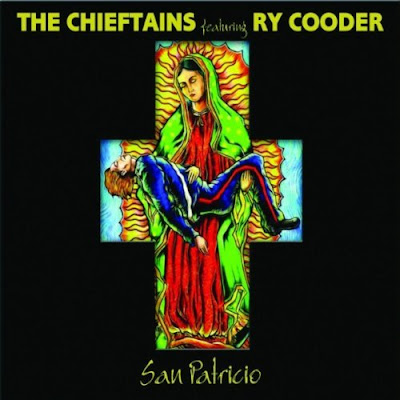 The mix of Irish and Mexican musical styles might seem a bit odd at first, but six-time Grammy winners The Chieftains will make you believers with their latest album, San Patricio (St. Patrick). With six-time Grammy winner Ry Cooder sitting and co-producing with Paddy Maloney, and guest appearances from the likes of Linda Ronstadt, Liam Neeson, Los Tigres del Norte, Chavela Vargas, Van Dyke Parks and Lila Downs, San Patricio may be the most vibrant and groundbreaking world music album to come along in some time. San Patricio tells the story of Irish immigrant conscripts in the US who deserted the US Army to fight on the side of the Mexican Army in the Mexican-American War in 1846. Villains in US history, the San Patricio battalion were heroes in Mexico, and their stories are brought to life on San Patricio.

San Patricio opens with the ebullient "La Iguana", guaranteed to have you dancing before its through. An introduction to Mexican culture for the Irish soldiers, "La Iguana" slowly infuses Celtic influence, culminating in the soldiers bringing in their own distinctive style of dance. "La Golondrina" (The Swallow) mimics the flitting flight style of its namesake with Irish instrumentation that begins to take on some of the Mexican flavor. The first two songs show the beginning of an understanding between the two musical cultures; an analogical basis for kinship between different cultures. Linda Ronstadt adds her lush voice to "A La Orilla de un Palmar" in one of the more moving pieces on San Patricio. Los Cenzontles sit in for "El Chivo", a high energy romp with the heart of a reel.

Ry Cooder's "The Sands Of Mexico" may be the centerpiece of the album. Cooder tells the story of the San Patricio battalion and why they chose to fight on the Mexican side. It's a gorgeous story song with both Irish and Mexican influences performed primarily by Cooder with The Chieftains providing color and background throughout. The Chieftains offer up a dark sea chantey on "Sailing To Mexico", one of the more quietly theatrical moments of the experience. Los Camperos de Valles join Chieftains on "El Caballo" (The Horse) in an inspired performance where the very rhythms of the song seem to suggest a horse at canter. The aural imagery here will take you surpise.

Liam Neeson delivers the prose of novelist Brendan Graham on "March To Battle (Across the Rio Grande)" The martial air delivered in Celtic instrumentation is a tragedy; men forced to serve against their will choose to fight on the side they see as just and are shot or hanged for their troubles. The ghosts of those soldiers still persist in the justness of their action in this chilling song. On "Lullaby For The Dead", the Chieftains deliver a pipe-driven funeral air with Moya Brennan on vocal. Half mourning and half full of hope, the song is a beautiful reverie on the wish of those left behind to see their loved ones again. Ranchero legend Chavela Vargas offers up a dreamy, expectant vocal on "Luz de Luna", showing more spunk and heart at 92 years old than many artists half his age.

"Persecucion de Villa" takes on a Mariachi sound that sounds like theme music from a movie. Mariachi Santa Fe De Jesus (Chuy) Guzman lend their voices and instruments to the story of Pancho Villa. The musical offering is par excellence. "Cancion Mixteca" sounds like a complete marriage between Mexican and Irish styles. The song itself is more in the Mexican style, but the instrumentation has completely melded into something that's no longer entirely recognizable as a blend of two disparate musical styles. The introduction is a two-and-a-half minute Spanish guitar instrumental that's worth the price of admission on its own. "El Relampago" takes on a life of its own with Lila Downs on vocal. It's a dance-inspiring tune of joy based on the music (unfortunately this reviewer doesn't speak Spanish). "Finale" reflects a melding of the two cultures which stand half a world apart, with Mexican and Irish styles melding into a song that is distinctly reflective each yet unique in its own fashion.

San Patricio might be the most ambitious effort of The Chieftains' long, decorated career. It might also end up as their biggest success. The story of the San Patricio battalion is a compelling one, and the Chieftains, Ry Cooder and their bevy of guests infuse the story with all of the life, laughter and sorrow that undoubtedly drove the passions of those involved. San Patricio is a classic; a Wildy's World Certified Desert Island Disc.

Rating: 5 Stars (Out of 5)
You can learn more about The Chieftains at http://www.thechieftains.com/ or www.myspace.com/thechieftains. You can purchase San Patricio from Amazon.com as a CD, a Download or as a deluxe CD/DVD bundle.
Posted by Wildy at 5:20 AM

Chavela Vargas may sound like a man, sure she's a diehard lesbian, nevertheless: she's definitively a woman!