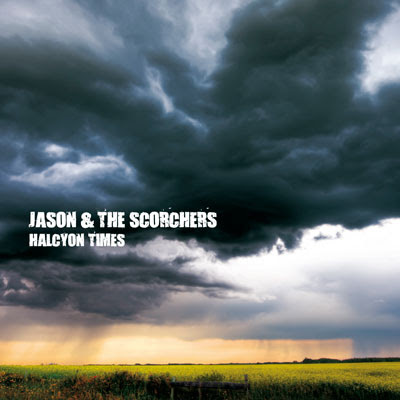 Once a band has won a Lifetime Achievement Award in their craft, they've likely settled into a comfortable sound and live out their days rehashing more of what is behind than what lay ahead. You might think that Nashville's Jason & The Scorchers were following the same path. The band's last new album was in 1996, and Jason & The Scorchers were honored at the 2008 Americana Music Conference with the aforementioned award. Instead, founding members Jason Ringenberg and Warner E. Hodges have teamed up with a new rhythm section consisting of bassist Al Collins (Stacie Collins) and drummer Pontus Snibb (Bonafide, Snibb) to create a dynamic new Classic Rock record in Halcyon Times. Co-produced by Hodges and Brad Jones (Over The Rhine, Chuck Prophet), Halcyon Times featured fourteen vibrant tunes full of the energy of a young band and the musicianship of seasoned veterans.

Halcyon Times opens with the electrical energy and Celtic flavoring of Moonshine Guys/Releasing Only Celtic Prisoners. It's a take-charge opener that sets the tone for the album. Beat On The Mountain is all about paying your dues; a solid tune with a great melody and harmony vocals. Mona Lee goes the Lo-Fi route with some serious Pop presence. It's by far the catchiest song on the disc and is the one most likely to get Jason & The Scorchers chart attention. The band settles in for the long haul in the middle of album, offering up a series of solid Rock N Roll laced with Americana, Pop and R&B influences. Gettin' Nowhere Fast and Golden Days are the highlights of the middle. Halcyon Times moves with solid effort and grace to the final four tracks, which collectively rank among the best songwriting Jason & The Scorchers have offered up over the course of their storied career.

The home stretch starts with Days Of Wine And Roses, a peppy, upbeat Rock arrangement with shades of Blue Rodeo and Wilco in its lineage. It's a solid tune that is right in Jason & The Scorcher's musical wheelhouse, and reminds you how they got that Lifetime Achievement Award in the first place. Better Than This is built upon a relentless guitar riff and is the best pure Rock song on the disc. When Did It Get So Easy (To Lie To Me) is the piece de resistance of the Halcyon Times; a classic Honky-Tonk style tune with some of the best vocal harmonies on the album. When Did It Get So Easy is certain to a fan favorite for as long as Jason & The Scorchers continue to make music together, and is more than a little bit likely to be covered by bands all over the map. Halcyon Times goes out with a bang with the post-Punk energy of We've Got It Goin' On. It's hard to tell whether the song is a bit tongue in cheek, or is an honest-to-goodness brash musical presentation from a band that shows no signs of slowing down with age and success.

You can learn more about Jason & The Scorchers at http://www.jasonandthescorchers.com/ or www.myspace.com/jasonandthescorchers. You can purchase Halcyon Times on CD from a number of net vendors, but the cheapest option is directly from the band (not to mention they'll sign it for you). If you'd prefer to rent your songs (i.e. purchase a download), you'll have to wait a bit longer. We were unable to find any online outlets.
Posted by Wildy at 5:20 AM

HAD A SHIT DAY STICK THIS IN YOUR CD PLAYER TURN UP TO 10 AND PUT THE BIGGEST SMILE ON YOUR CHOPS...ROY ARNCOTT