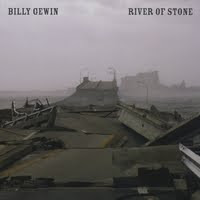 Billy Gewin has spent a decade and a half as part of the Indie scene in Atlanta, Georgia. Over the last ten years he has released three solo albums while playing in cover bands, doing session work and recording other people’s projects in his home studio. On Gewin’s latest album, River Of Stone, he displays a charming vocal style and honest, straight-forward songwriting. Both qualities make River Of Stone eminently likeable.

River Of Stone opens with "These Days", a song about hitting a point in your life where the troubles of young adulthood are behind you and the path forward looks clear all the way to your dreams. The mildly upbeat arrangement is pure country/rock; perhaps even reminiscent of the southern rock style of Lynyrd Skynyrd. "The Hand I Hold" is a fatalist's anthem; done in an Americana style that makes it sound like a classic from the late 1960's or early 1970's. Gewin changes perspective quickly on "Can't We All Play Together", a tongue-in-cheek song that explains how a fantasy can come out all wrong. Gewin offers up a heartfelt tune in "The Other End (Of The Telescope)". Gewin's imagery is a bit out of the ordinary, but the tune succeeds on the basis of an easy delivery and comfortable Americana arrangement that will grab on you and not let.

"Hard As We Try" is an affably mellow country rocker, as is "River Of Stone", although the album has a somewhat complacent feel at this point. Gewin shakes off this atmosphere with "My Cousin Margaret", a fun story song about a cousin who comes to town once a year to cause a little trouble before returning to her job with the ATF. "Pancakes" finds Gewin reminiscing about one of the "little things" that sticks out in your mind about a relationship long after many of the larger details have been forgotten. It's an endearing tune that will hit home with a lot of listeners. Gewin closes out with "Can't Stand Up", a paean to being overwhelmed by the love of another. It's a sweet song in an affable arrangement and seems like the best choice on the album for single.

Billy Gewin is eminently likeable on River Of Stone, using a solid, charming voice and easy to hear Americana arrangements to run his slightly out-of-left-field lyrical imagery by listeners. You may feel a bit lost amidst Gewin's lyrical turns at times, but the music will keep you coming back. River Of Stone is a treat.

Rating: 3 Stars (Out of 5)
You can learn more about Billy Gewin at http://www.billygewin.com/ or www.myspace.com/billygewin. You can purchase River Of Stone as either a CD or Download through CDBaby.com.
Posted by Wildy at 5:00 AM