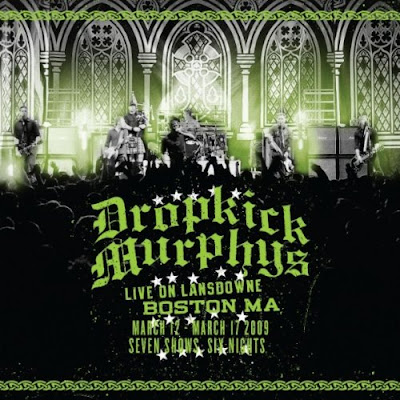 Born in a Boston basement in 1996, the Dropkick Murphys have taken a slow rise to being one of the most popular Indie acts in all of music. Beloved in their hometown and in college towns all over the US (as well as other parts of the world), Dropkick Murphys have grown from a pure punk/folk outfit in their early days to the finest purveyors of Celtic Punk this side of The Pogues. On March 16, 2010, Dropkick Murphys release Live On Lansdowne: Boston, MA. The CD captures Dropkick Murphys in all their glory, playing their collective hearts out before a home town crowd on St. Patrick's Day, 2009.

Dropkick Murphys have been performing their St. Patrick's Day shows in Boston for nearly a decade now. The event has become more than just a concert; it's a happening. That energy busts out of every seam of Live On Lansdowne. Dropkick Murphys open with "Famous For Nothing" to a crowd hungry for whatever they have to offer. The frenetic pace of the opening track sets a standard you'll think Dropkick Murphys can't maintain over a 20 song set, but you only have to listen to see how wrong you might be. '"Johnny, I Hardly Knew Ya" is performed in hard-boiled style, like Captain Tractor performing on steroids. The version offered here is highly entertaining, and if you're dancing along you'd better hope you can keep up. Dropkick Murphy's offer up their personal tribute to the NHL's Boston Bruins on "Time To Go". It's one of the more entertaining "team" songs you're likely to hear, full of the gusto and zest of a true fan.

"Sunshine Highway" mixes bagpipes and Country/Rock guitar in one of the more unique aural offerings on the disc. "Sunshine Highway" plays like the consummate concert sing-along; the sort that fans throw a fit over if it isn't included in the set list. Dropkick Murphys waste no time from there, launching right into "Flannigan's Ball", a raucous Celtic rocker that will have you dancing for all you're worth. Dropkick Murphys work their way through fan favorites such as "God Willing", "Captain Kelly's Kitchen" and "Citizen C.I.A." before launching into the mournful "Fields Of Athenry". Written by Pete St. John, "Fields Of Athenry" tells the story of a young man sentenced to be sent to Australia for stealing food to feed his family during the Great Irish Potato Famine. Dropkick Murphys play this song with a sort of reverence that you might not guess from much of their Punk energy-infused show; it's a definite highlight.

The band and the crowd go all out on "The Warrior's Code", the story of an aging fighter that seems like it might apply to all sorts of sporting events and folks who might have hung on past their prime. "The Dirty Glass" brings another highlight, with Civet's Liza Graves stepping forward to claim a mic and share vocals with Dropkick Murphy. The performance as a whole is among the best of the disc, and Grave's performance in particular will have folks who don't already know her searching the internet to find out what else she has out. Dropkick Murphys re-recorded "Tessie" a few years back, and their version has become a mainstay at Boston Red Sox games. The song is eaten up by the obviously partisan crowd. Dropkick Murphys dedicate the next song, "Forever", to all of their fans in celebration of thirteen years of "the best job in the world". It's hard to say whether the band or the crowd has the more impassioned voices on the song, but either way it plays as a mutual celebration of all that is past and all that's yet to come.

Dropkick Murphy's start their final sonic assault with the full-frontal energy of "Worker's Song", paying tribute to all those who punch the clock doing work that makes life easier for the rest of us. "Kiss Me, I'm Sh!tfaced" is dedicated to the ladies in the crowd. It's a tongue-in-cheek song of machismo from someone whose judgment is best served at the bottom of the next pint. At this point in the concert the song likely applies to at least half the crowd, and camaraderie between the band and the crowd is amazing. The Mighty Mighty Bosstones join Dropkick Murphys for the closing number, a rousing rendition of "I'm Shipping Up To Boston". The Dropkick Murphys end the set the way they started, open full throttle and playing for all they are worth.

Having heard of Dropkick Murphys often over the years, I'd never managed to hear one of their recordings. Live On Lansdowne: Boston, MA is revelatory. If you've seen Dropkick Murphys live or followed them over the years you already know what you're getting into when you buy this album. If you are a novice to the band, Live On Lansdowne will open your eyes to a new world of musical experience. Arguably Dropkick Murphys are in their own element for this show, but it’s rare to find a concert on CD that raises the same level of excitement in a listener as a live show. Live On Lansdowne captures that live energy and passion and brings it to wherever you are listening. The Celtic Punk flavor of the music is refreshing, and fans of bands like The Dubliners, Captain Tractor and The Pogues will love the disc before the first song is half over. Live On Lansdowne: Boston, MA is the crowning achievement on a career thus far; a career that's far from over.

You can learn more about Dropkick Murphys at http://www.dropkickmurphys.com/ or www.myspace.com/dropkickmurphys. Live On Lansdowne, Boston, MA drops on March 16, 2010. You can order copies from Amazon.com as a CD/DVD combo, an LP/DVD combo or as a digital download in standard or deluxe versions.
Posted by Wildy at 6:02 AM

This won't succeed in reality, that is exactly what I think.