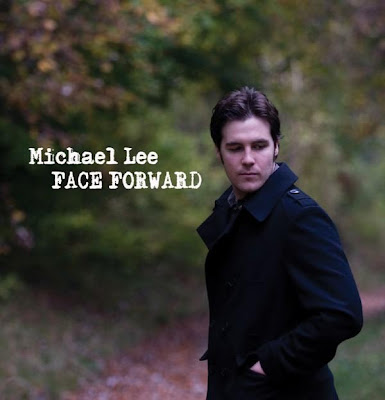 Michael Lee hails from the fertile ground of Longwick, England. Among the many crops cultivated there over the years is an impressive instrumental and songwriting talent has just begun to show itself on Lee's solo debut, Face Forward. Lee previously gigged under the band name Soul Capture, but thought to emphasize his solo efforts and persona more. The result is sonically pleasing album with more instrumental meat than your typical pop fare. Lee draws on the British tradition of high melody, ranging from Folk-based Rock N Roll to Progressive compositions with a few ballads thrown in for good measure.

Face Forward opens with Land of Change, a pleasant if slightly innocuous opener that's more significant for the introduction of Lee's gorgeous upper range and his subtly intricate guitar work. Lee gathers momentum with Trust, a catchy and upbeat tune that downplays the vocal line without giving up any energy. Lee's guitar work would seem to gather inspiration from sources such as Andy Summers, Ray Phiri and Mark Knopfler, making it all sound easy in the process. There's even a bit of King Crimson in some of the later passages in the song. Despite gives us a closer listen to Lee's lower vocal register, which isn't as enjoyable as the upper; here Lee sounds congested or constricted in the throat. The melody, however, is interesting, with a highly artistic, almost baroque feel. Progressive inclinations make themselves known in the guitar line.

Lee brings out great interplay between guitar and piano in Tired, almost as if a spirited conversation is occurring between the two. Tired is about reaching out in a relationship where one person is simply not paying attention, making the instrumental work a distinct parallel for the story line. Add in some gorgeous vocal harmonies and a melancholy timbre and you have quite the listening experience. Mystery Of Life might be the most fetching song on Face Forward; the sort of quiet but resolute ballad that could be a keynote song in a musical. Lee keeps things simple here, letting the uncomplicated beauty of the melody lead the way. Youth finds Lee lamenting the loss thereof, engaging again in the practice of trying to parallel the story in the instrumental arrangement. Youth starts out sounding somewhat you and simplistic with a lot of energy, becoming more complex and full of shadows as the song progresses, accented by Eric Johnson-like guitar licks.

In The Picture plays like an overdone 1980's ballad. The mood is again melancholy, as the subject is an unsettled relationship with two suitors, but you can almost hear Lou Gramm tackling this song in his waning days with Foreigner. Distant Future is one of those songs that seems destined to end on mix-tapes made by love struck teenagers (and none too few adults). Lee eschews cliché, putting aside sappy declarations for a simple statement in song that will resonate with anyone who's ever felt the blush and flutter of new love. On Never Enough Time, Lee steps forward with a tune that sounds like it might have come out of a Pearl Jam recording session. Lee softens the edges but cuts an intriguing path with distinctive minor key harmonies and complex, flowery guitar work. The positive message involved doesn't hurt a bit, either. Face Forward opens with a purposeful piano part, drawing in drums that add an incessant, urgent feel to the song. This isn't Baroque Pop, but it badly wants to be. Strings, bass and guitar add support, but Lee's piano is the star here, telling an epic tale in just over five minutes that will be like a cup of manna for Prog Rock fans. Face Forward winds down dusk with That Day, a piano-based tune featuring some of the most starkly intriguing vocals on the album. Lee performs a virtual duet through much of the song, at times creating differentials that are worthy of a shiver or two down the spine.

Sometimes you can see it coming. Something about the album cover or the track list tips you off that an album will be special. Other times, it's a somewhat non-descript guy on a relatively normal seeming album cover. There's nothing in the track list or press kit that really gives you a clue. Then you press play, and the artist takes over your life for forty-five minutes to an hour. It's that way with Michael Lee. This unassuming guy Longwick spins tales in instrumental packages so intriguing you can't help but drop what you're doing and give him your full attention. Face Forward might not turn out to be Lee's perfect moment, but he dances with the concept so closely on Face Forward you'll root for him to get there. And you'll keep coming back.

You can learn more about Michael Lee at www.myspace.com/michaeleeuk, where you can purchase a copy of Face Forward using PayPal.
Posted by Wildy at 5:15 AM