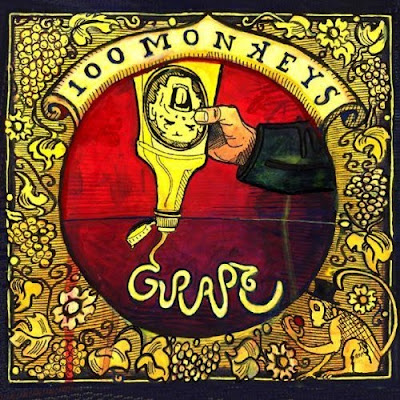 In a world where Twilight is the biggest thing since Harry Potter on sliced bread, a band featuring a character from the film is bound to draw some attention. L.A. concoction 100 Monkeys has the distinction of calling Jackson Rathbone a member, which if nothing else doesn’t hurt their press opportunities. In 2009, 100 Monkeys released their third digital album, Grape! It’s an odd collection of tunes ranging from wonderfully crafted anti-pop folk rock to maudlin dirge-like compositions

Grape! opens with the wonderfully hap-hazard and Lo-Fi “Clippity Clop”. Tight musicianship reigns despite the messy appearance of the song, and the catchy nature will suck you in from the opening notes. “The Monkey Song” is a deranged folk rocker incorporating elements of hip-hop. The song is a tongue-in-cheek fun romp, but don’t be entirely surprised if some sensitive soul raises issues about the social responsibility of the content of the song, as the images used have classically held racial undertones. “Arizona” is a derivate rocker that makes open use of parts of Creedence Clearwater Revival’s “Bad Moon Rising”. It’s a funky folk-rocker that’s highly listenable.

100 Monkeys goes from accessible to re-dressable on “Sweet Face”, a forgettable bout of melancholy in song about a potential suicide. “Orson Brawl” is a quirky 1980’s rock tale ala The Talking Heads; intriguing for the sound the first few times you hear it but fading from notice soon thereafter. “Looker” is most memorable for the vocal caricature of Elvis Presley done throughout the song. It’s an entertaining song full of sophomoric humor that will appeal to some and turn others off. 100 Monkeys sleep-walk through “Junkie” and “Sleeping Giant” before stumbling into the gritty rocker “Reaper”, whose blues influences and oddly accented arrangement will make it stand out in your mind once the album is done.

“.38 Special” explores the perceptions of a disturbed mind on the path of a breakdown. This dark path is documented in the context of a jaunty tune mixed with moments of blurring dissonance that reflect the deterioration between what’s real and what is not. The song is almost Beatles-esque in its clearer moments, with a melody that lights up a room. “Poison Oak” is a classic “you reap what you sow” parable in song laced with dark musical undertones. An intriguing listen, “Poison Oak” is relentless in both meaning and timbre and is among the finest work 100 Monkeys offers on Grape! Dark humor reins on “Wings On Fire”, an energetic funk-rocker that takes on the subject of dying on a plane that you’ll consider highly entertaining unless you happen to be listening to it on a flight. For all of this great work, 100 Monkeys made the puzzling decision to close with "Grocery Store No More", among the least accessible and least enjoyable songs on the disc.

So in spite of having a young Hollywood actor involved (often the musical kiss of death for a band); 100 Monkeys actually has something going for them in the music department. With dark and insanely interesting musical arrangements, and a resolutely non-PC and vaguely adolescent but still funny lyrical style, 100 Monkeys might be on to something that could catch on in a big way. The bulk of the band’s material is a little too left of center for commercial radio, but there are one or two songs on Grape! that are catchy enough and quirky enough to make some real noise. The album a whole is a solid effort with a few weak spots that most listeners will overlook on balance.
Rating: 3.5 Stars (Out of 5)

You can learn more about 100 Monkeys from http://www.100monkeysmusic.com/ or www.myspace.com/these100monkeys. Grape! is available for download on both Amazon.com and iTunes (iTunes also has a Seedless, or non-explicit version of the album for download for all of you parents monitoring what your children are listening to).
Posted by Wildy at 6:04 AM