Review: Debbie Cunningham - The Rest Of Your Life 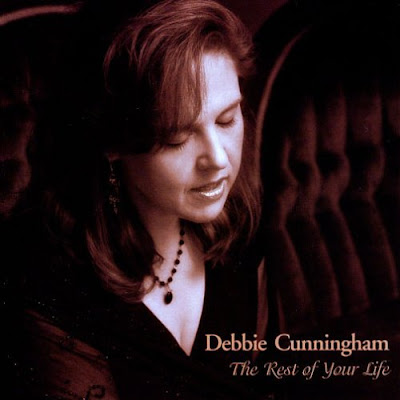 When your backing band includes people who have played with Roberta Flack, Buddy Rich, Harry Belafonte and Ben Vereen, you know you're off to a good start. Debbie Cunningham studied music at Temple University two decades ago, and pianist Barry Sames tried to get her to record an album back then. Persistence paid off for Sames. Cunningham returned to Philadelphia from her home in Tennessee to record an album with Sames and some of the best jazz talent on the East Coast. The resulting album, The Rest Of Your Life is a modern take on some of the classics of the American Songbook, as well as a few unusual nuggets.

Debbie Cunningham has a voice that fits comfortably in a more modern jazz feel, and Sames and band have accordingly crafted arrangements that maintain the classic sense but with a modern feel. "My Funny Valentine" is interpreted as a mid-tempo pop/jazz tune. It's an interesting reading that isn't going to sit well with traditionalists, but is solid in its own right. It becomes very clear that Cunningham is more of a pop vocalist tackling jazz tunes by the time "How Much I Love You" rolls around. Cunningham shows off her upper range on "When I Look In Your Eyes", once of the better moments on the album. Cunningham tackles Stevie Wonder's "Overjoyed" with more enthusiasm than pizzazz, missing the heart that Wonder poured into the song or even the cool offered in Jane Monheit's recent cover.

Cunningham hits her nadir on "What's New", offering up a classic performance that would work in any era. "Just In Time" is offered as an up-tempo number; certainly one that will unnerve the traditionalists in the crowd. It's decent, but difficult to get used to compared to more classic readings of the song. Perhaps the toughest moment on the album is Cunningham's take on "(Our) Love Is Here To Stay", which is delivered as a rapid-fire bossa nova. This song has been done well so many times by so many different artists over the years that a new interpretation has to be inspired to be accepted. Cunningham closes with "What Are You Going The Rest Of Your Life" in a solid performance.

Debbie Cunningham has a very pretty voice, much better suited to pop material than jazz standards. Consequently, The Rest Of Your Life is mostly pleasant throughout, but there's just something missing from the experience. The instrumental work is insanely good as you'd expect from the pedigree of the backing band. As pretty as Cunningham's voice is, she's overmatched by some of these songs. The attempts to radically re-interpret some of these tunes in modern-sounding arrangements only underscores that fact, and may do more of a disservice to Cunningham than anything else. The Rest Of Your Life is solid, but just doesn't stand out.

Rating: 2.5 Stars (Out of 5)
You can learn more about Debbie Cunningham at http://www.debbiecunninghamjazz.com/. You can order The Rest Of Your Life from CDBaby as either a CD or Download.
Posted by Wildy at 5:00 AM

Thanks for the review and post. I appreciate it.
-Debbie
Free Download of the CHOCOLATE song:
www.debbiecunninghamjazz.com