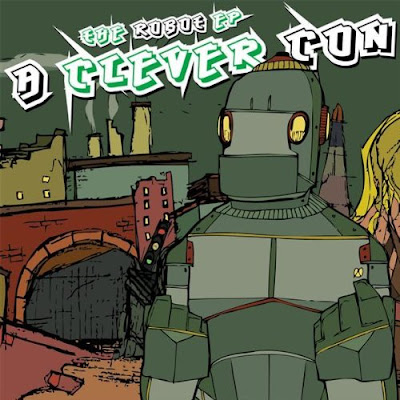 A Clever Con is the best new thing on the New Jersey rock scene since Bon Jovi. While you sort that last statement out, just give a few minutes over to listening to the band’s debut, The Robot EP. Taking modern rock, punk, retro (classic) rock and a distinctive pop sensibility and wrapping it all up into one seething rock n roll core, A Clever Con will melt your face while you dance the night away.

The Robot EP opens with "Work Related Stress", a vibrant punk rocker with real commercial bite. The song is centered on a tremendous hook in the chorus and boundless energy that will inspire you to get up and dance. The incessant guitar of "60 Amp Disconnect" brings to mind the phrase 'melodic punk' as A Clever Con piles on impressive vocal harmonies without giving up their sense of edginess at all. Ripping through “Robots And Mannequins”, A Clever Con decelerates for the edgy ballad Heroine, a tune that could make big waves on Modern Rock radio as it explodes into a power ballad chorus with chutzpah. “Able Danger” is a bit unclear in its intent. The song seems to want to inflame conspiracy theories about 9/11, although it may be a veiled jibe at those who do (it's not made entirely clear). The song is well written but vague lyrically. The Robot EP closes with “Little Miss Bombshell”, an acoustic power ballad you'll have on repeat.

The Robot EP is a fine introduction to A Clever Con; full of energy and purpose and more than a little musicality. Bands like A Clever Con prove that Modern Rock & Alternative aren't dead. If these guys are any indication, the future of Rock N Roll is in good hands in the generation of bands just starting to filter up out of their basements.

Rating: 3.5 Stars (Out of 5)
You can learn more about A Clever Con at www.myspace.com/aclevercon. You can download The Robot EP from Amazon.com or iTunes.
Posted by Wildy at 5:00 AM