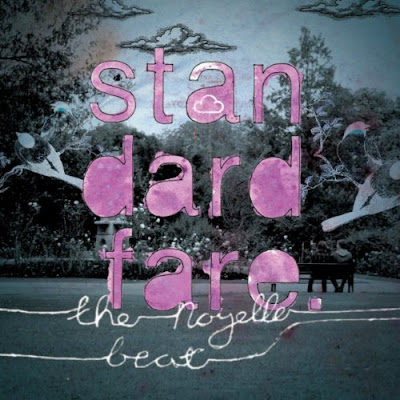 Standard Fare returns to their ABCs on The Noyelle Beat, playing music very close to the roots of Rock N Roll. Opening with "Love Doesn't Just Stop", Standard Fare uses a wide-open guitar-based arrangement and Lo-Fi production to counterpoint Emma Kupa’s intriguing voice. Running the gamut from a cross between Chryssie Hynde and Edie Brickell lower voice and a sailing upper register, Kupa fills up the sound perfectly. "Philadelphia" is a song encompassing the angst of being in a long distance relationship. The song takes on a Punk-like energy in the chorus and the plainspoken lyrical style works well here. "Fifteen" describes one of those choices you wish you hadn't made later, and could probably result in charges being brought if the details ever came to light. The song is very entertaining and catchy.

Standard Fare stumbles through "Let's Get Back Together" and "Secret Little Sweetheart" and into the emotionally awkward "I Know It's Hard". The song opens on a dynamic guitar riff that belies the plaintive feel of the song. The melancholy air lingers over "Married", a lamentation over finding happiness in a place other than where you expected. "Edges & Corners" returns to a higher energy level that befits Standard Fare's slightly messy sound. Standard Fare closes with "Wow", documenting in song the moment when you realize a relationship might just be real from the perspective who doesn't feel like they deserve such happiness. Wow carries with it a plainspoken awkwardness that gives it a sense of emotional authenticity. The semi-rough, garage quality of the song is charming as well.

Standard Fare is anything but. You're likely to form a wide range of opinions of the band over the course of the thirteen tracks on The Noyelle Beat. It would be easy to say that Standard Fare has yet to find their sound, but it's more likely that they've found and just haven't figured how they fit into it yet. Emma Kupa has a distinct voice that you'll always recognize once you've heard it, and Danny How is solid on vocals, although a bit overexposed on the slow numbers. All in all, The Noyelle Beat is a solid effort.

Rating: 3 Stars (Out of 5)
You can learn more about Standard Fare at http://www.standardfare.co.uk/ or www.myspace.com/standardfare. The Noyelle Beat drops on March 16, 2010. You can pre-order CDs and Downloads from Amazon.com.
Posted by Wildy at 5:10 AM