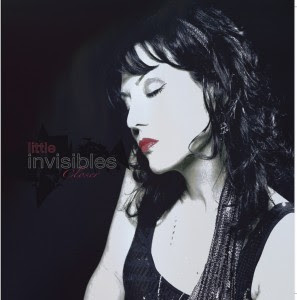 Gina Degnars has been a fixture on the New York and Philadelphia music scenes for a number of years (as well as her native Delaware). The songstress, who studied at Boston's Berklee School Of Music, released an album with her prior band, Stygian Veil back in 2001 (Poison Berries), but has continued to create wonderfully dark and textured piano-based Alt-Rock over the years. In 2009, Degnars was ready for a transition, incorporating more distinctly Pop melodies and electronic beats in her music. This change led to the formation of Little Invisibles, and the release of the band's debut EP, Closer. Preferring minor keys and human frailty to the shallow happiness of modern pop or the cynical boredom of most alt-Rock, Degnars climbs through her existential musical angst to generally find the element of hope that drives us all.

Closer opens with the urgent exhortation of Breathless. The song is part fascination and part mourning; the singer still finds her other enthralling but the feeling is no longer reciprocated. The musical canvas gives a desolate, lost feel, and tension in the vocal line is wholly palpable. What Once Was explores the aftermath of a relationship while still yearning for what was. The emotions here are raw and compelling, and earnestly represented in the stark nature of the instrumentation. Gina Degnar's yearning, mournful voice is full of tragic beauty, emoting both the passion and frustration that drive the song. Not One Of You is highly reminiscent of some of Tori Amos' more emotional mid-career musical ramblings; a performance that appears ready to come across at the emotional seams at a moment's notice but never disintegrates. Little Invisibles closes with Headrush, with Lance Davis providing Bono-esque vocals alongside Degnars in a starkly beautiful performance that's enthralling and more than a little disturbing.

Gina Degnar's dark side drives the music on Closer; a diluvial outpouring of mixed emotion and angst against esoteric, keyboard-driven compositions. Degnars falls somewhere in the triangle between Tori Amos, Kate Bush and Bjork vocally, drawing a lonely strength from a sublime combination of vulnerability and certainty. Closer is probably destined to be under-appreciated in light of current mores, and unfortunately so. Degnars is a singular talent as both a writer and performer, and Little Invisibles coalesce nicely around the dark clouds of her muse.

You can learn more about Little Invisibles at www.myspace.com/littleinvisibles or http://www.littleinvisibles.com/, where you can purchase a copy of Closer on CD. Downloads are available through iTunes.