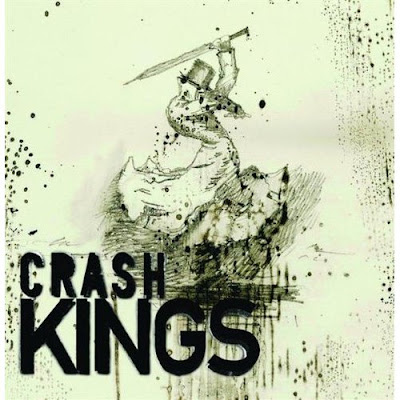 Brothers Tony and Mike Beliveau were brothers long before they were band mates, but as two-thirds of the Crash Kings, the brothers Beliveau have shown the sort of chemistry filial connections can bring to a rock band. Add in the stellar drum work of Jason Morris, and you have a recipe for success. The Los Angeles trio released their debut album in May of 2009. The self-titled debut disc perhaps hasn’t garnered the attention it deserves to date, but it’s not for lack of talent or musicality.

Crash Kings open with "Mountain Man"; a tune somewhat reminiscent of early Led Zeppelin for its stark rawness. Vocalist Tony Beliveau has all the makings of a big time glam-rock front man and a voice that jumps out of the speakers and grabs your attention. "1985" will have you dancing like its 1985. The arrangement here is somewhat sparse, but there's no question about the intensity or control involved. "It's Only Wednesday" is a piano-driven rocker delivered in an open arrangement that allows Beliveau to reign supreme over the top. The further you get into this album the more hooked you'll be. There's something indescribably catchy about Crash Kings the vibe they create on their self-titled debut.

"Come Away" finds Crash Kings settling into a mellower Brit-sound that will be familiar to fans of bands like The Killers and Oasis. Beliveau shows his lyrical side on songs such as Come Away and Non Believer before launching into the blistering pace of "14 Arms". Crash Kings let their glam hang out on this one even while sticking with the quasi-acoustic sound that holds sway here. Beliveau stomps and prowls like Freddie Mercury and blows the roof off. "Raincoat" embarks on a story driven by nervous energy as expressed in the uneven pace of the bass line and the percussive, Ben Folds-style piano line. "Raincoat" is the most sonically satisfying song on the album. "Saving Grace" is the sort of Glam/Brit-Pop anthem that launches national adulation and worldwide tours. Progressive and Pop elements help this song to enter the ever declining arc of the parabola extending toward Pop perfection. Crash Kings close out with "My Love", a theatrical love song that will remind listeners of a cross between Queen and The Beatles, and perhaps even a bit like Michigan rockers Woodward.

Rock N Roll is dead. Yeah, right. Crash Kings are at the forefront of a new generation of rockers with retro influences who are creating vibrant, challenging music. It's difficult to imagine a band like Crash Kings not making it big, although on a major label even the brightest talent can be snuffed out and relegated to the bar circuit by one inept executive who doesn't get it. Regardless of what sort of push they get, expect Crash Kings to be on a lot of critics "best of" lists. Crash Kings will hook you on the first listen and still be with you far down the road.

You can learn more about the Crash Kings at http://www.crashkingsmusic.com/ or www.myspace.com/crashkings. You can purchase Crash Kings as either a CD or Download from Amazon.com.
Posted by Wildy at 5:10 AM