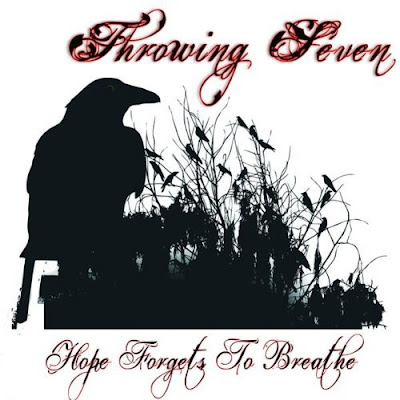 Los Angeles stalwarts Throwing Seven push their melodic power rock to the masses with the release of their debut album, Hope Forgets To Breathe. Regulars in clubs across Southern California, Throwing Seven create a sonically dense three-guitar sound and wrap it around emotionally impactful lyrics. Lead by the monomonous lead singer Jude, Throwing Seven looks to take things to the next level with Hope Forgets To Breathe, after spending the past couple of years playing major festivals including the Vans Warped Tour.

Hope Forgets To Breathe opens with "Push", a stripped down and tightly controlled Modern Rock anthem built around a compact arrangement, rapid-fire drumming and the needful vocals of Jude. "Push" has radio hit stamped all over it; the sort of song that can catch fire at the right time and get a lot of spins quickly. The bass player puts a funk stamp all over Push and carries it over into "Four For Free". "Four For Free" sounds a bit more typical of a modern rock band, but Throwing Seven sticks with the compact style, letting their musicality take precedence over volume or speed. "When The Lights Go Out" finds Throwing Seven retreating into more stereotypical sounds for their genre. The energy and originality of "Push" and, to a lesser degree, "Four For Free" falls by the way side. "Black Maria" restores the energy in a virulently angry track that's worth hearing.

"Saturday Night Soldier" finds Throwing Seven opening up with a more metal-oriented sound without giving up their compact, New Wave sound. The guitar sound is bigger, the drums faster and meaner, but Jude retains his Pop-metal credentials on a serious face-melting tune. "Let It Bleed" finds Throwing Seven amping up the energy in a serious guitar rock anthem worth paying attention to. Throwing Seven turns down the amps on the opening of "Lotus", building through the first verse into a full-bore rocker full of layered guitar and a highly variable rhythm section.

Throwing Seven creates exciting Rock N Roll on the surprising Hope Forgets To Breathe, building in enough rock credentials to survive in a market like LA but with enough musical heart to export their sound outside The City of Angels. Throwing Seven isn't the sort of album that truly breaks a band; it's more the one before that sets the band up to the breaking point. What Throwing Sevens do next is ultimately up to their creative process.

You can learn more about Throwing Seven at www.myspace.com/throwingseven or http://www.throwingseven.com/. You can download Hope Forgets To Breathe through iTunes. Hard copy CDs are available directly from the band at live shows. If you can't make it to a show but want the CD, message the band through MySpace. I'm sure they'll be happy to help you out.
Posted by Wildy at 5:10 AM