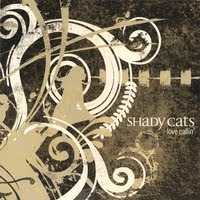 Raleigh, North Carolina’s Shady Cats has been a long time in the making. Singer/songwriter Grady Crumpler started playing a regular gig near his home back in 1995. After being invited to play a private party, he hooked up with drummer Bill Eagen, who provides the rhythmic core for Crumpler’s songwriting. Together with a revolving committee of musicians, they became known as Grady Crumpler & Last Call, and eventually Shady Cats. Shady Cats began recording songs and demos nearly a decade ago. This piecemeal approach led to a focus on the songs rather than a specific sound for the band. Crumpler shopped songs to various producers. Consequently Shady Cats’ debut album, Love Callin’, has three producers of note involved. John Plymale (The Pressure Boys, Squirrel Nut Zippers, Superchunk, Meat Puppets); Dick Hodgin (Hootie & The Blowfish) and John Custer (Corrosion Of Conformity, Cry Of Love) all bring their masterful hands to bear on Shady Cats’ work. The result is an uneven but promising album that makes up in creativity what it sometimes sacrifices in continuity.

Love Callin’ opens with the uber-catchy title track. Vocalist Grady Crumpler has an enigmatic and enjoyable voice that's occasionally reminiscent of Elvis Costello. "Love Callin’" is a great start; if this song had been released circa-1986 the members of Shady Cats could have bought mansions with the proceeds. "Lost Myself" marches the line of demarcation between 1970's classic rock and 1980's pop; a territory that Shady Cats tread throughout much of Love Callin’. "Lost Myself" has one of those melodies that stay with you and recur at the oddest moments. Crumpler shows a deft lyrical touch on "She Kisses Me With Her Eyes". The song is virulent, catchy enough to knock "Lost Myself" out of the catbird seat in your brain, and the imagery is just off the beaten path enough to catch your attention.

Shady Cats have a special guest on "In The Moment", with legendary producer and performer Don Dixon (REM, Guadalcanal Diary, Hootie & The Blowfish, Moxy Fruvous) sitting in on vocals. Dixon's vocals are top notch, but the song gets a bit too wrapped up in its soul-searching feel. "You Got A Way" finds Shady Cats back in the early 1970's sonically, featuring big guitar riffs and barre chords as rock and jazz mix in uneasy but pleasing measures. On "Lines", Shady Cats head for a solid rock arrangement with country accents (primarily in the guitar line). "Lines" is a highly enjoyable song that stands out in spite of not being ostentatious. Shady Cats show serious chutzpah on "I Want Independence", with Crumpler laying down the most serious guitar solo on the album. Shady Cats find pop magic on "Take Me", a high-speed rocker with R&B roots that could be a hit in any decade in the rock era. If "Love Callin’" would have enabled the members of Shady Cats to buy mansions back in the 1980's, "Take Me" would have bought the entire town.

Shady Cats dig in with a positive message on "All The Way", but message falls a bit flat in a lounge arrangement that sounds contrived and very much out of context with the rest of Love Callin’. "Till The Rain Comes" sticks with the positive thinking, pointing out that sometimes even the rain is a good thing. The sound here is a cross between Elvis Costello and Fleetwood Mac (particularly in the harmony vocals); a retro sound that sounds amazingly relevant for the music scene of today. Shady Cats wind down with the theatrical rock aria "Desperation", among the most enjoyable tracks on the disc. The Cats taken listeners on an interesting turn at the albums close, dangling another side of the band as they walk out the door that is likely to bring listeners back the next time around.

Shady Cats put their best foot forward on Love Callin’, blending 1970's classic rock and 1980's pop and in the process serving up a highly palatable brand of rock 'n roll that's highly palatable for today. Grady Crumpler is a solid lead on vocals, and accents the songs on Love Callin’ with mildly adventurous guitar work that will please the ears of casual listeners while seeming a bit too tame of fans of classic rock. Love Callin’ is a safe album, but some of the songs here are so catchy they might need to be quarantined.

Rating: 3 Stars (Out of 5)
You can learn more about Shady Cats at www.shadycats.com. You can purchase Love Callin' as either a CD or Download from CDBaby.com.
Posted by Wildy at 6:00 AM