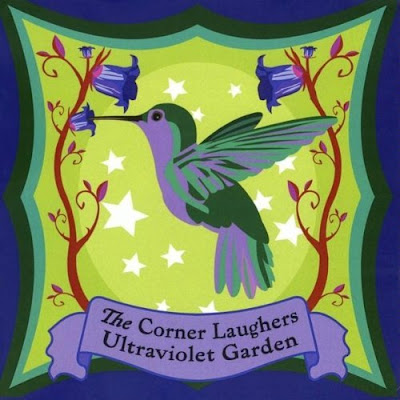 San Francisco's The Corner Laughers could be called the unintended complication of a Catholic School education. They also happen to be Wildy's World's Artist Of The Month for March, 2010. Karla Kane (singer/ukulele) and Angela Stilletto (guitar) met as kindred spirit while still in Catholic prep school, joking that they would start a band called The Corner Laughers in spite of neither playing an instrument. Born more of social cohesion than anything else, the duo developed into something more over time, blending a unique and eclectic pop sensibility with intelligent, offbeat lyrics and a wicked sense of humor. The Corner Laughers released Ultraviolet Garden in the Fall of 2009 on John Wesley Harding's Popover Corps, and have received a wealth of critical acclaim as well as being included on several year-end "best of" lists. If the Bangles co-mingled with The Cure and then went out for Drinks with They Might Be Giants and Barenaked Ladies, the resulting band would sound a lot like The Corner Laughers.
Ultraviolet Garden opens with "Shrine Of The Martyred Saint", the story of someone pining his life away rather than living what's left of his life. This sad story is delivered in a compact and peppy Pop/Rock arrangement that will have you tapping your toes and looking for a dance floor. "For The Sake Of My Cat" has a 1960's girl group sound updated for the 21st century. R&B underpinnings and great vocal harmonies help the song soar in a tale about a relationship that lingers over two people's favorite feline. The delicious pop confections continue on "The Commonest Manifesto"; The Corner Laughers explore the aftermath of a relationship and the emotional barriers it creates.

"Inner Archaeologist" is brilliant; a song questioning the intentions of a suitor out of the composer's own insecurity. The arrangement is a brilliant mix of vaudevillian camp and Folkgrass. You'll chuckle at the juxtaposition of meaning and tone, but the song is amazingly human in its insecurities and self-protection. On "Half A Mile", The Corner Laughers explore the ups and downs of a long distance relationship in ambivalent terms (I guess I'll make it through). There's a distinct sense here that even though her heart is in it, she's tiring of the waiting and traveling for stolen moments. "Silver Medal" returns to the upbeat, New Wave style that The Corner Laughers opened with in an incessantly enjoyable tune.

"Dark Horse" takes on a failing relationship in the same peppy style that seems to serve The Corner Laughers so well; there being something thoroughly infectious about their sound. Contagion continues on "Thunderbird", perhaps the best pure Pop/Rock song on the album. You won't be able to help yourself from dancing. "Yellow Jacket" takes that urgent energy and folds into a slightly more pointed song about making things happen. This song ends in a happy honeymoon tinctured in a sugary sweet chorus with whistles, and is another amazing bit of songwriting. "A Country Song" deftly explores the twists and turns that might bring two people together or in this case keep them apart. The Corner Laughers are at their most brilliant here, offering crisp acoustic Pop with a country flavor and Punk energy in a song that deserves to be trumpeted from rooftops. The Corner Laughers close with "Space Echo", getting right to the destruction of the Earth in the opening lines of the song. It's a bizarre song with the baroque Pop feel of a lighter Tori Amos tune and an absurdist bent ala a love story cooked up by a partnership between Syfy and Lifetime Movie Network.

The Corner Laughers write brilliant Pop songs delivered primarily on acoustic instruments on Ultraviolet Garden. This sort of sense for melody and arrangement tends to result in long career arcs that wind up with on-going shows in places like Las Vegas. The Corner Laughers have enough Pop sensibility to stay on the Pop culture radar, but walk off the beaten path enough to garner counter-culture support as well. In short, The Corner Laughers succeed so well by being adamantly themselves. The music is irresistible; the lyrics intelligent and sometimes funny. Vocalist Karla Kane has the sort of voice that speaks of a late-blooming flower, sultry and sensual but hidden behind a shy intellect that's as prone to misdirection and humor as it is to blunt observation. The vocal harmonies are to die for; and the album, Ultraviolet Garden, is the sort of debut that a band could spend the rest of their career trying to match (much less top).

Rating: 4.5 Stars (Out of 5)
You can learn more about The Corner Laughers at http://www.cornerlaughers.com/ or www.myspace.com/cornerlaughers. Ultraviolet Garden can be purchased directly from the band on CD. Downloads are available through Amazon.com .
Posted by Wildy at 5:20 AM

Labels: Barenaked Ladies, John Wesley Harding, The Bangles, The Cure, They Might Be Giants, Tori Amos