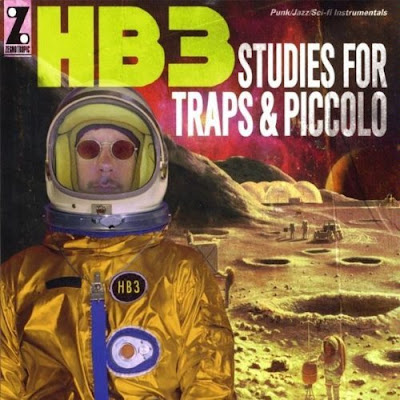 HB3 is back with his third album in the past twelve months. HB3 started this odyssey with The Veldt, one of the most wholly original recordings of 2009. HB3 Plays The Piccolo Bass found HB3 exploring the seams of his muse a bit, focusing more on musical minutae in an esoteric collection that allows for the development of diverse styles and sounds. Now, with the April, 2010 release of Studies For Traps & Piccolo, HB3 strips his writing down to its most basic level. Using generous effects (including the legendary Super Fuzz pedal); HB3 manages to create one of the most distinctive and original recordings for the year thus far.

HB3 gets things moving with “Rocket Science”, revolving around one big riff that’s reminiscent of early KISS. HB3 gets a big, fuzzy/buzzy sound going early in an entertaining but over-too-quickly opener. “The Machineries Of Joy” is a cyclic, buoyant song that alternates uplifting, energetic passages and movements with serene times full more of ambience than anything else. “Leroy Of The Ancient World” is a crunchy, distortion-filled jam with big percussion. “Leroy” is at least in part a vehicle to show off effects. HB3 goes a bit generic on “Fire Fisher”, a pleasant but essentially harmless tune that sounds like incidental music from a film score. If you’ve ever wondered what might have happened had Stockhausen and Namlook been contemporaries, give a listen to “Brutal Bed”, where the spirits of their muse fight it out for supremacy. The battle is a well-fought draw as HB3 lays out what sounds like a sonic ode to the concept of creation. “Tyrannosaurus Rex” is a powerful rocker that sounds like an ideal template for a neu-metal anthem. “The Abyss” takes you on a lonely, explorative journey that’s nearly subsonic at times. The song has an intriguing new-agey feel without giving up its essential edge. HB3 closes with “The One Who Waits”, a stodgy marriage of drum and bass that sees the two co-exist but never really connect. They play together well at first, but the illusion of conformity is shattered incrementally like a slow-motion replay.

Learn more about HB3 at http://www.hb3.com/. Studies For Traps & Piccolo is available as a CD or Download from Amazon, or as a download from iTunes.
Posted by Wildy at 12:39 AM