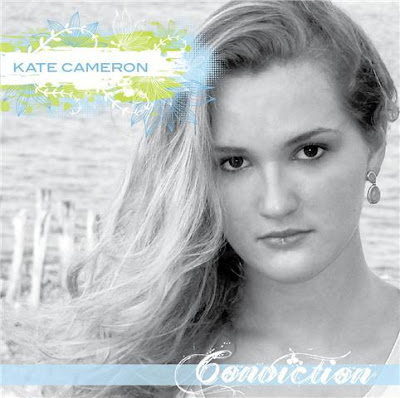 Duxbury, Massachusetts is the home to 16-year old singer/songwriter Kate Cameron, one of the fresher, younger faces in Indie Rock N Roll. Cameron brings her positive-vibed singer/songwriter style to bear on her debut EP, Conviction, a remarkably poised and energetic album for such a young songwriter. Cameron has been writing songs for five years now, infusing them with empowering lyrics while using her music as an outlet for the things she has a hard time putting into spoken words.

Conviction opens with one of its own. Big Star is a kiss off song and a declaration, perhaps, of where Cameron aims to end up. The Fiona Apple meets Mary J. Blige vocal sound is a bit off-setting at first, as it is apparent that for all of Cameron's efforts she hasn't quite grown into that voice yet. Sounding a bit forced and top heavy periodically throughout the sound, Cameron's best moments might be when she tests her apparently ample upper range. Big Star has a run-on, stream of consciousness flow that wears a bit over the course of the song as well. The Sun is an ode that ends up sounding somewhat shrill at times. Cameron has grand designs here, but just doesn't have the vocal power to pull this song off without sounding over-stretched.

Words I Could Never Say lays it all on the table; a song full of love and longing. There is a bit of awkwardness in the lyrical flow but on the whole it's not a bad song. Cameron sounds a bit more at home here than on the first two tracks, but falls prey to the apparent need to fill up the vocal line with mini-runs. This showy style may work well for some artists but doesn't sit well on a song like Words I Could Never Say, which is by its very nature a humble admission of deep-seated feelings. All That You Are is too low in pitch of Cameron's comfort, a fact that is glaringly obvious, and it still sounds like Cameron is trying to sing in a voice that's not her own. Things don't change on His Song For You, but Cameron shows glints of hope on Soul Mate. Cameron's still trying to sing as someone she's not here, but the quasi-belting nature of the song forces Cameron to open up her throat and use a bit more of her natural sound. In contrast the difference is startling, although you may not hear a lot of difference without careful attention. Cameron is still growing into the big voice that will one day be at her disposal, but the forced sound on much of Conviction doesn't serve her well. Cameron closes out with Take This Moment, a pure piano ballad where you'll hear some of Cameron's true sound. She still mixes in the heavier affectation at times, but the stripped down nature of the piano-only arrangement allows Cameron to relax a bit. Cameron's isn't a perfect voice, but there's nothing here that can't be fixed with training.

At base, Kate Cameron has some talent as a vocalist. How much of her potential she realizes will depend greatly on how soon she embraces her true voice and works to enhance her natural strengths rather than trying to sound like someone else. The songwriting on Conviction is appropriately young, but Cameron shows flashes of lyrical and compositional talent that will grow as she grows and writes more. Conviction is a solid first recording and is instructional as to what Cameron needs to do next to get where she wants to be. As a commercial product, Conviction has a very small scope.

You can learn more about Kate Cameron at www.myspace.com/katecameronmusic. You can purchase Conviction as a digital download from iTunes.
Posted by Wildy at 5:00 AM