Review: Butch Walker And The Black Widows - I Liked It Better When You Had No Heart 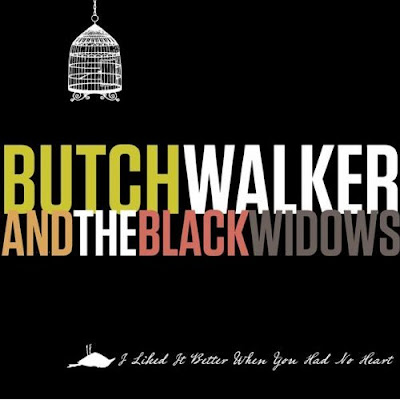 Butch Walker And The Black Widows - I Liked It Better When You Had No Heart
2010, One Haven Music

Butch Walker has had his share of success over the years, as guitarist for GangStar and particularly the Marvelous 3, Walker has known success as a performer. As a songwriter and producer for artists such as Weezer and Pink, Walker's songs have gone on to even greater success. More recently, Walker became a father, turned 40 and lost his home and recording masters. At this crossroads, Walker's songwriting has suddenly taken a more philosophical turn. Butch Walker's latest album, I Liked It Better When You Had No Heart offers up some of his most mature and prescient songwriting to date. While the title perhaps anticipates the response of some longtime fans to Walker's transition into the next stage of his life as a musician, anyone who has followed him any length of time knows that Walker's worldview isn't so much changed as broadened.

Walker's opens with the enigmatic "Trash Day", a scene in music as it were, taking in vignettes of everyday life in song. It's a unique and brave opening, working as much on its audacity as its veracity and pure musicality. "Pretty Melody" is a post-modern love story in song; a "how we got here" tune that is memorable both in lyrics and melody. Walker shows how he can pick moments of beauty out of thin air on "Don't You Think Someone Should Take You Home". The sentiment is pretty straight forward in the context of the song, and the arrangement is as close to "perfect" as you'll find. "Canadian Ten" is a melancholy look at a lost night that seems to glorify the fact that he can't remember what happened. The tone of the song reflects more of a lonely emptiness in the fact however, and the melody is reminiscent of some of Paul McCartney's more esoteric material.

Walker gets symphonic in scope on "Temporary Title", a wonderfully dense mix of voices and instrumentation with a dashing melody and vital pop feel. "She Likes Hair Bands" is one of those songs that are great for late in the set when the alcohol is flowing freely and everyone is ready to sing along. The cadence of the chorus is unforgettable. "House Of Cards" displays a distinctive post-Beatles pop sensibility and is one of the catchiest tunes on the disc (this is not said lightly). Walker saves the best two tunes for last. "Days/Months/Years" is a delightful old school rock n roll tune about trying to get over a relationship in truly dysfunctional fashion. It's sort of a "Weird Al" meets George Thorogood moment that's unforgettable. Walker says goodnight we "Be Good Until Then", a tune you can imagine he wrote for his newborn child. Some may take issue with some of the particular statements in the song given the intended audience, but the songwriting is absolutely amazing. Wonderfully direct and apropos based on his life experience, Butch Walker thoroughly outdoes himself with "Be Good Until Then". This is a classic.

Music is a funny business. Some musicians find a way to hit once and spend their whole lives trying to claw back to that moment of glory. Guys like Butch Walker never fully embrace the glory, but continue to find themselves dancing on the edges of its spotlight. In Walker's case it's because an amazing talent as a songwriter. Walker has always had the ability to craft amazing pop songs, but as he begins to seriously mature as a songwriter; those raw talents he's brandished all these years are blossoming into something approaching genius. I Liked It Better When You Had No Heart may be a tongue in cheek title, but there's no joking about how good Butch Walker's latest work is.

You can learn more about Butch Walker at http://www.butchwalker.com/ or www.myspace.com/butchwalker. You can purchase I Liked It Better When You Had No Heart as either a CD or Download from Amazon.com.
Posted by Wildy at 5:25 AM