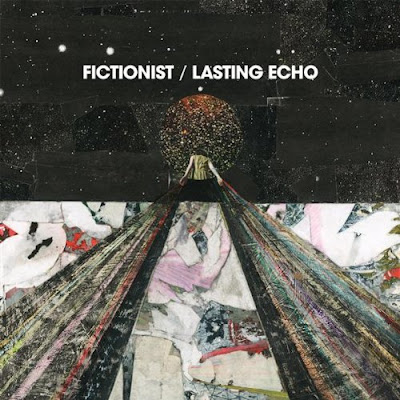 Utah post-genre rockers Fictionist deliver more than mere reflection on Lasting Echo, their second-full length album recently released independently. Featuring the cultured baritone of Stuart Maxfield as well as his Wilco-esque guitar work, Lasting Echo is the sort of album that legitimizes a small market band's reputation and helps them gain regional and perhaps even national stature. Fictionist dwells in a delicious mix of vibrant creation and introspection where melody is king.

Lasting Echo opens with always, a dark and eerie Prog Rocker resplendent in synth and guitar-driven light. The emphasis here isn't sound and fury so much as it is nuance and change. Human Wings is reminiscent of some of the softer fare from 1970's Canadian rockers Max Webster; a mellow rock ballad with ample guitar fills. The sound is a bit closer to Pink Floyd on Sunshine Of A Shell; layered guitars balance off the tension of the vocal line in smooth peaks and troughs of sound that begins and ends in the ebb and flow of a church organ. Maxfield's voice is the perfect complement to the instrumental sounds created on Lasting Echo, often aiming for a plain, easy singing style but occasionally breaking out to punctuate a moment or emotion.

Strangers In The Dark is one of those songs that seem to take on its own distinct vibrancy; as if the song were playing Fictionist rather than the other way around. Structural, key and rhythm changes drive this musical conversation between a narrator and Fate; both aware and wary of the other. As always, Fate wins out by inertia, but the narrator still holds on to the hope that a "spark" could change it all. Time To Time digs into the emotions surrounding a relationship that's ended but which one of the parties can't quite let go of. The arrangement is full of delicious tension and more than a few fun lyrical turns "It's been awhile since I've had your mascara on my sleeve.") The guitar work here is exquisite; you could hear Time To Time playing on big AOR stations alongside 1970's stalwarts like Frampton, ELO, Zeppelin and BTO and Fictionist would sound like they were never elsewhere.

Fictionist brings in a distracted, mellow Jazz vibe on Deeper And Deeper, one of the more intriguing compositions on Lasting Echo. Rhythmic variations in the percussion drive against the plaintive wall instrumentation to create interesting moments of tension against unusual vocal harmonies and lead into a distinctive organ solo that ranks among the best instrumental turns on the album. Lasting Echo closes with Have Mercy, a plaintive plea built into a lovely, stripped down arrangement that lulls you out of the album and back into the real world.

Fictionist delivers a highly nuanced and compelling listening experience on Lasting Echo, delivering on the title with an album that will speak to you well after the disc stops spinning. Gentle rock with Progressive tendencies and patient, deliberate songwriting is sure to please listeners across several genres, and should ensure that Fictionist does the album thing at least one more time. Lasting Echo is a tremendous start.

You can learn more about Fictionist at http://www.fictionist.com/ or www.myspace.com/fictionistband.
You can purchase Lasting Echo on CD from CDBaby.com. Downloads are available via iTunes.
Posted by Wildy at 6:03 AM