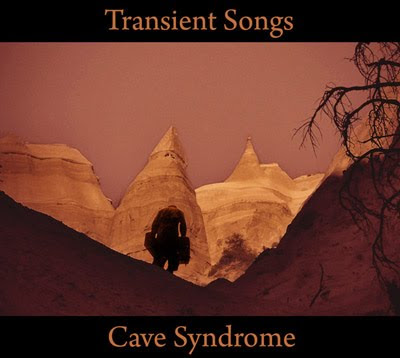 Cave Syndrome opens with the ethereal Americana gloom of "In The Darkness Light Seeps Through". Steeped in melancholy, the song has a benign, detached feel that makes it difficult to connect with. "Smoking Slows The Healing" is mired in a plaintive sense of harmonic duality. The arrangement pays little mind to how various instruments match up for pitch, creating a disturbing musical tableaux. "The Cancer In Our Bloodlines" has lyrics that should have more impact than they do in the end. The arrangement offered here is much too passive for the subject matter; a disconnect that can work at times but fails to here. There are elements of beauty in the song, particularly in the strings, but they are buried in too much interference.

"Wide Open Skies" presents decay as a allegory for personal angst, pointing to the sky above as a glimmer of the possibilities that exist. The approach here is again highly passive, interwoven with dark understanding of the ultimate end but uses a temporary pleasure to make it alright ("someday the earth will be above us, but for tonight wide open skies"). "Golden Gardens (Lungs & Livers)" is a maudlin paean to the terminality of human existence and some of the weak points that befall us. The point doesn't seem to be so much loss but the loneliness of the experience of dying. "Astoria" and "Burrow Patch" maintain this emotional descent, with Transient Songs expressing a blend of self-pity and loss throughout. Cave Syndrome closes with the title track, a more upbeat turn that looks back on the dark valley that the album commemorates. "Cave Syndrome" is brief and offers uncertain resolution to the album; it's impossible to tell whether the end result is true healing or simply candid acceptance. The sudden end to the song speaks ill, perhaps, and the album as a process leaves you hanging with questions unanswered.

Cave Syndrome is the sort of album that will make you angry, tired, frustrated and even thoughtful. You'll want to turn it off several times throughout and often find yourself unable to. Like an auto accident, there's a curious quality to the pain that runs throughout the album, and Transient Songs buffer the experience with musical arrangements that are both fitting and disturbing in equal measure. Cave Syndrome is not a pleasant listen, but it's one you may find yourself drawn back to again and again.

You can learn more about Transient Songs at http://www.transientsongs.com/. You can purchase Cave Syndrome on CD from CDBaby.com.
Posted by Wildy at 5:05 AM