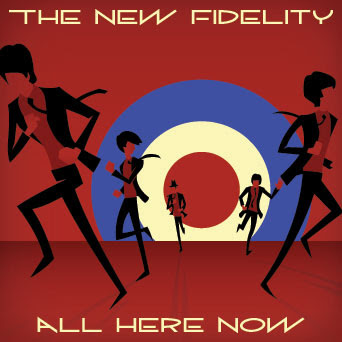 Modern Mod Rockers The New Fidelity bring their light-inflected Pop Rock regularly to stages on the west Coast of the US and Canada. Regularly featured on KROQ, KXLU and KCRW, The New Fidelity have found their music featured in films and on television shows on ABC, NBC, the CW and FuelTV. Their live shows are a mix of originals and covers of 1960's British Invasion and Motown songs, and The New Fidelity never leave a crowd dissatisfied. The New Fidelity's latest album, All Here Now, features the band at their musical height, rocking in retro love fueled by The Beatles, The Who and The Small Faces but with a modern Pop economy that's sure to expand their brand well beyond the West Coast.

All Here Now opens with the ebullient "Simple Things", a song taking big joy from small measures in a relationship. The New Fidelity rock out to Pop-radio hooks in a catchy tune that could easily be a big thing. The New Fidelity seem to have a gift for making Rock N Roll that sounds just a bit messy but is full of glorious melody lines you can't help but sing or hum along to. "Setting Sun" is a perfect example; having an almost 1960's garage sound pared with an irresistible melody and bounce. The good time Rock N Roll continues on "Best Time To Say Goodbye" in spite of the perhaps not so happy intent of the song. The New Fidelity slows the pace a tad on "Dark Eyes", a gentle light rock love song that plays like a classic. The vocals/harmonies here are picture perfect, and the lyrics will land this song on scores of mix tapes. There's also a very cinematic air to this tune, so don't be surprised if it shows up in a romantic comedy in the not too distant future. The band takes a Motown swing on "All My Soul", a catchy love song with a classic sound that would play well in any decade from the 1970's on. All Here Now makes last call with "Native Son", a funk-driven Alt-Rocker you won't be able to get out of your head. It's a love song to Los Angeles from someone who didn't originate in L.A. but now calls it home. Rather than the gritty adoration you hear in songs about New York or Chicago, All Here Now combines a Midwestern retro rock sound (ala Woodward) with a vibrant California song that traces its roots back to groups such as the Beach Boys.

Somewhere between Woodward and The Beatles, with a bit of Beach Boys thrown in, you'll find The New Fidelity. It's a wide open space to be sure, but The New Fidelity fill it amply. This is a band that's going somewhere, with virulently catchy songs and a sound that's familiar-yet-new all at once. All Here Now at another time would have been scooped up by a major label before you could blink. As it is, the EP should allow The New Fidelity to open the ears of a lot of new fans. Make sure you're one of them.

You can learn more about The New Fidelity at www.myspace.com/thenewfidelity or http://www.newfidelity.com/, where you can download All Here Now for absolutely free!
Posted by Wildy at 5:04 AM

Labels: The Beach Boys, The Beatles, The Small Faces, The Who, Woodward

It can't really have effect, I believe this way.