Review: Songs Of Water - The Sea Has Spoken 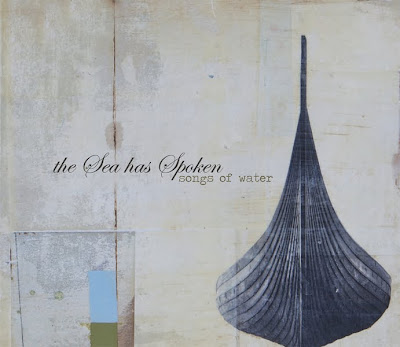 Just two months into the year, we're ready to declare that Songs Of Water's The Sea Has Spoken is one of the most finely crafted (mostly) instrumental albums for the year. Others may come along and vie for the crown, but it's going to be tough to take it out of Songs Of Water's hands. Mixing and melding Classical, Celtic, Bluegrass and New Age styles into a coherent sound around highly original compositions, Songs Of Water has far and away surpassed their self-titled 2008 debut. It doesn't hurt having much of the Skaggs family sitting in throughout the album (son Luke is a member of Songs Of Water), but Ricky Skaggs and two other members of the Skaggs clan ad instrumental support without impinging on Songs Of Water's highly original sound. The Sea Has Spoken drops on March 26, 2010.

From the opening notes of “Everything That Rises” you'll know you're in for a different experience than on most pure instrumental albums. Hammered dulcimer, violin and guitar entertain in an energetic musical conversation that is as uplifting as the song title might imply, even amidst the note of relinquished sorrow that runs through the main theme. The musicianship here is absolutely incredible, a symphony of sounds gained by non-symphonic means. “Bread And Circus” ranges from modern to antiquity, sounding at times like the sort of chamber music that once entertained European illuminati. “Window Seat” makes use of contrapuntal rhythms and soaring passages that evoke vivid images in your mind; a sort of soundtrack to dreams you don't quite remember. Stephen Roach steps forward on vocals for “Sycamore”; a pleasantly mellow tune that's a nice change of pace but doesn't carry the same vibrancy as the instrumental work on The Sea Has Spoken.

“The Great Russian Catastrophe” is highly rhythmic with heavy Slavic influences that are quite enjoyable, but “Through The Dead Wood” takes the manic rhythms a step further as a thoroughly percussion-based composition that is nothing short of amazing. Fans of groups like Rusted Root in particular will love what Songs Of Water has going on here. Bluegrass chutes push through beneath “The Family Tree”, an amazingly lyric composition full of some of the tightest, most precise musicianship on the album. For all of that fine control, not an ounce of spirit is lost. “Luminitsa” plays like the musings of a Romani Bard, blending Spanish, Middle Eastern and Eastern European musical elements into a style that's instantly foreign yet familiar. “Luminitsa” brings an air of mystery to The Sea Has Spoken, dark and beautiful and ever so slightly out of reach. “Hwyl” carries with it a distinctly urgent feel, tearing along at breakneck speed as Songs Of Water heads into the final stretch home. “Belly Of The Whale” plays on the Biblical tale with a mystic mix of rhythm, ambience and truncated instrumentation. “The Sea Has Spoken” is a resigned if not mournful undulation that seems more a running monologue than a time-oriented pronouncement. The title track is a thing of beauty, slow in pace and measure; deriving beautiful arcs of melody, particularly from the violin. Songs Of Water closes out with the plaintive “Willow”, the second and final track featuring vocals on the album. The cyclic nature of the mandolin part and the cadence of the melody seem to speak of the eternal ebb and pull of the ocean on the earth, or the wind through the trees. The song is elemental in feel and emotional impact, winding down the album almost as day blends into night.

Songs Of Water made is very apparent with their self-titled debut that they were a band not to be taken lightly. They could easily have trod the same ground they did on Songs Of Water, but instead chose to continue wading deeper into their muse. Consequently, The Sea Has Spoken shall be spoken of in terms of brilliance. The nuances and shading in the music are unusual in anything like the popular realm; the blending of styles such as bluegrass, world and classical is uncommon if not unique. In spite of the lack of a distinct genre to hang their hats on, I wouldn’t be surprised if Songs Of Water were named in company with bands such as The Chieftains one day.

You can learn more about Songs Of Water at http://www.songsofwater.com/ or www.myspace.com/songsofwater. Songs Of Water will celebrate the release of The Sea Has Spoken on March 26, 2010 at the Visulite Theater in Charlotte, NC. Keep checking the band's website for availability.
Posted by Wildy at 5:20 AM

So, I don't actually suppose it will have effect.