Review: Rob Morsberger - The Chronicle Of A Literal Man 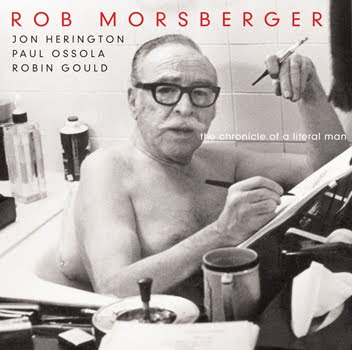 Rob Morsberger - The Chronicle Of A Literal Man
2010, Hieroglyph Records

Rob Morsberger is a classically trained pianist and composer based in New York City who not only scores television shows (NOVAscienceNOW) and session work with artists such as Marshall Crenshaw, Crash Test Dummies, Jules Shear and Loudon Wainwright III, but he also has three distinctive albums to his name. Writing from a musical depth that is rare in pop music, Morsberger crafts highly intellectual and occasionally twisted stories in song that are never dumbed down and always challenge the listener to think beyond their usual day-to-day considerations. Having found this style of writing works, Morsberger saw no need to change on his upcoming release, The Chronicle Of A Literal Man, due out May 11, 2010.

The Chronicle Of A Literal Man is based ostensibly on the life of Dalton Trumbo, one of the Hollywood Ten who were blacklisted from Hollywood due to their political beliefs in the days of Joe McCarthy and the Red Scare. The album opens with the title track, the unrepentant declaration of someone whose been beaten down, pushed around and generally chastised yet perseveres and perhaps even thrives in spite of it all. It’s a great rock tune with an energetic guitar solo and a solid kick-off for the album. “Stroke Of Insight” will call to mind thoughts of a Tom Petty/Bob Dylan hybrid. The song is highly literate and smart, with an unforgettable melody and solid arrangement to wrap it up tight. “Independent Movie” finds Morsberger stripping down the sound to acoustic guitar, percussion and voice. The musicianship here is top notch. “Modestino” has a pensive, perhaps even rueful feel; a classic 1970’s singer/songwriter vehicle. “When Everything Ended” is one of the more artful breakup songs you’ll come across. This retrospective on a romance gone bad has a gorgeous melody, and Morsberger crafts the story with a gentle but compelling touch. “Nebraska In Winter” could be an epilogue; marking how sometimes the escape we seek becomes the loneliness we run from. The story is told in a Springsteen-esque ballad (think The River) that will hold your attention. Morsberger closes out with the solid Americana arrangement of “You Don’t Get It”, a safe closer that moves back to the sonic middle of the road.

Rob Morsberger displays a keen but subtle wit on The Chronicle Of A Literal Man; not a humorist per se, but a fine story teller who sprinkles his stories with wit, charm and the occasional deep artistic reference that pretty much only Dennis Miller gets without reading the liner notes or press materials. Morsberger is an outstanding and in-demand side man, and his score work is impressive, but it’s in his singer/songwriter mode where Rob Morsberger shines brightest. The Chronicle Of A Literal Man is very much worth spending some time on.

Learn more about Rob Morsberger at http://www.robmorsberger.com/ or www.myspace.com/robmorsberger. The Chronicle Of A Literal Man drops on May 11, 2010. Keep checking Morsberger's web page for availability.
Posted by Wildy at 5:48 AM