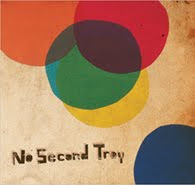 Washington, D.C.’s No Second Troy is a band long on perspective, applying deep understanding to life’s experiences in music after the fact. Exploring the divide between Indie Rock and melodic power-pop, No Second Troy has spent the last four years building a solid fan base in and around D.C. With the release of their eponymous third album on April 27, 2010, No Second Troy looks to expand well beyond The Beltway.

No Second Troy opens with “Colors”, a brief collage that serves as an intro for “Grounded”. The two pieces constitute a slow start for the band, taking a much more bland approach than you might expect. “The Black And White Movie” is all about how perceptions can shape reality, particularly as it pertains to the ideals of relationships. “The Black And White Movie” is catchy and full of crunchy guitar, and the sing-along chorus is highly memorable. “Leap Of Faith” features one of the better vocal lines on the album, and might make a run at commercial country radio with the right push. “Wake Up” finds No Second Troy walking off the beaten track, mixing ethereal soundscapes with crunchy guitar

The best songwriting on the album can be found in the form of “This Is The End Of Me”. No Second Troy infuses the song with vocal harmonies reminiscent of Brian Wilson and some delicious keyboard work. Things get a bit more generic sounding on songs like “Let It Go”, “Surfacing” and” The Argonaut” before delving into the gorgeous folk/pop of “Golden Age” The album closes on some weak notes, losing some of the energy that No Second Troy seems capable of capturing.

No Second Troy is an honest, fair effort from a band stretching its wings and trying to grow into something more. The fact that the songs don’t always work is more of a testament to how difficult it can be for a band to find its voice than to the talent level of No Second Troy. At their best, No Second Troy soars with all the elements of a big time pop song in place. In their darker moments these things can fall in on the band and make it difficult to perfect their musical visions, but the intent, heart and vision are there waiting to bloom more fully with each successive song. No Second Troy isn’t a triumph, yet, but it’s a solid building block on the road to victory.