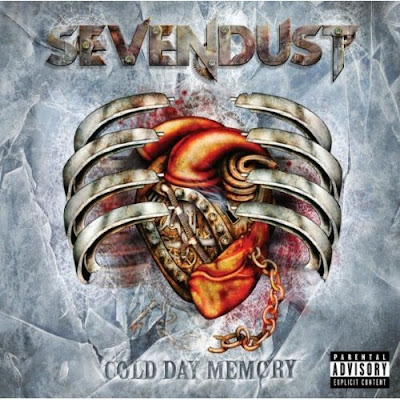 Nothing beats coming home, something guitarist Clint Lowery realized after returning to Sevendust after a three album absence. Lowery was a vital part of Sevendust's early success, helping to fill out the distinctive sound of the band with both his guitar and backing vocals. Not that Sevendust had been bereft without Lowery in the intervening years. The band has continued to enjoy commercial and artistic success, but the homecoming was good for everyone, as evidence by Sevendust's 8th studio album, Cold Day Memory, due out on April 20, 2010.

Cold Day Memory opens with the trip-hammer percussion and searing guitar work of "Splinter", going for face-melting power right out of the box but with just a touch of pop sensibility woven in. The intensity is maintained on "Forever", a relentless barrage that is both powerful and memorable. The album's first single, "Unraveling" has been a commercial monster for the band, peaking at #6 and becoming Sevendust's highest charting single to date. Vocalist Lajon Witherspoon benefits greatly from the more open arrangement here, letting go of the tightly controlled range he sometimes manages in the band's more sonically dense material. This is vintage Sevendust, and obviously commercial radio agrees.

"Karma" is one of the more sophisticated tunes Sevendust has tackled over time, blending tribal beats and nuanced guitar in the verse before ripping the roof off with a big, explosive chorus. Expect this one to be a live favorite. Sevendust bolts into "Ride Insane" with both barrels blazing for a pure metal experience before heading a more pop/metal route on "Confessions". "Confessions" has the pre-requisite big rock chorus and serious pop pretensions. The verses here are pensive with strong vocal harmonies and a lyric guitar undertow. This is the most sonically refined song on the album and the one most likely to have serious crossover potential.

Sevendust stays in the highly accessible category with "Nowhere", a throwback to the era of classic rock and metal with a highly lyric element that's pleasing to the ear. This song could be huge for Sevendust, both for the sound and the theme of an ambiguous destination, which may appeal to a generation disillusioned by its prospects. The accessibility continues on "Here And Now" before Sevendust turns things up a notch for two on "The End Is Coming". This is a great tune with some seriously heavy elements blended into a pop-metal matrix, and succeeds in spite of the subject matter of end times which is so fashionable at the moment its already outdated. Sevendust wades deeper and deeper into the heavier sound on "Better Place" and the closing number, "Strong Arm Broken". The latter may not sound like a classic closer, but it's the perfect epilogue for Cold Day Memory.

Reunions have a high degree of unpredictability. Some fail miserably, some soar. More often than not the result is mixed. Cold Day Memory finds Sevendust in the midst of a reunion that merely seems like the next step in the evolution of the band. The magic that was present in Sevendust from the beginning has been restored in much the same fashion that classic movies get restored. All was well before, but from the perspective of this moment it’s clear that as good as Sevendust has been over their past three albums, they were somehow incomplete. The original lineup gels right from the beginning of Cold Day Memory. Long time fans will be stoked, and Sevendust stands to broaden their fan base with what may be their best all-around album to date.

Learn more about Sevendust at http://www.sevendust.com/ or www.myspace.com/sevendust. Cold Day Memory drops on April 20, 2010. You can pre-order the album from Amazon.com as either a Limited Edition CD/DVD Dual disc or Download.
Posted by Wildy at 6:13 AM