Review: Seasons After – Through Tomorrow 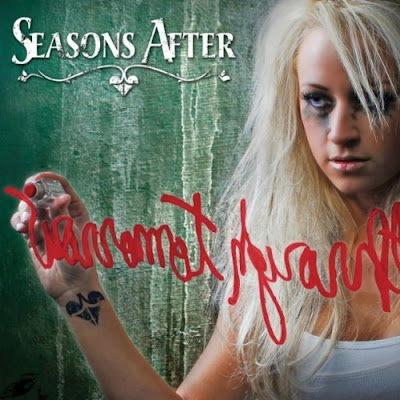 Seasons After – Through Tomorrow
2010, Dirtbag Records

Wichita, Kansas quintet Seasons After has a nu-metal vibe with old-school roots; blending arena-rock vocal harmonies with guitar work influenced equally by Iron Maiden and Sevendust with a bit of Faith No More blended in for good measure. Since forming in 2006, Seasons After has won the regional Ernie Ball Battle Of The Bands twice, as well as being invited to perform on Headline Dirtbag Records’ main stage at SXSW 2009. With prior features in both Revolver and Metal Edge magazines, Seasons After has developed a level of name recognition that is enviable. The band tries to build on the buzz with their latest album, Through Tomorrow.

Through Tomorrow opens with “Some Things Burn”, predicated on blistering, crunching guitar work with alternating lyric and screaming vocal lines. The song has a decent melody delivered in dark overtones inside of a big, pulverizing sound. Seasons After make it clear they can hold their own on stage with the heavy hitters of rock and metal “Through Tomorrow” is both powerful and catchy, but would work perfectly well (perhaps even better) without the periodic emo/scream style vocal parts. In this case such histrionics actually detract from the song. Seasons After sounds a bit more formulaic during “On Your Own”, but the harmonies are solid and the song is at least decent.

“Marked” shows a more pop/metal orientation, with potential for crossing over between radio genres without giving up the sonically heavy presentation. Perhaps what is most impressive about Seasons After is the quality of musicianship. Metal bands can often get by with average proficiency in most spots if one guitarist is above-average, but the players in Seasons After all appear to be top-notch. “Hell Is…” finds Seasons After returning to their heavier oeuvre in a decent but not spell-binding effort before moving into the banal “Save You”. “Save You” is redeemed by some seriously enviable guitar work, but the rest of the song is somewhat forgettable.

Seasons After tries to marry pop and metal in the awkwardly constructed and ultimately unsuccessful “The Knife”; featuring strong guitar work and a fair effort. In the end, the blend just doesn’t work. The emo/scream vocals seriously detract from “The Knife”; a choice that’s befuddling considering the extent of musical talent here. “Let Go” is built on a guitar riff that sounds as if it might have come out of an old Motley Crue session. The song itself is a bit of a mess, galloping off at its own pace in the verse before cleaning up nicely for the chorus. The weakest track on the disc may end up being the most popular. “Cry Little Sister” is a painfully obvious attempt at a pop/metal crossover. The harmonies as solid and James Beattie and Chris Dawson offer powerful guitar work, but Chris Schlichting is somewhat pedestrian as a rock/metal front man. His voice is decent enough, but the charisma you’d expect out front just doesn’t come across on CD. Seasons After gets the pop/metal blend down on “The Worst Parts”, showing the rock n roll presence that is missing on “Cry Little Sister”. Through Tomorrow closes with an acoustic take on “Cry Little Sister”; an improvement on the plugged version that still sounds somewhat contrived.

Seasons After shows big talent on Through Tomorrow, standing in stark contrast to some big challenges the band faces. Vocalist Chris Schlichting comes across as an adequate front man on the album, but the passion and energy you’d expect just don’t shine through in the studio. The songwriting ranges from solid, above-average material at its best to contrived and poorly conceived at its worst. Seasons After is a band you’ll want to like right out of the gate, but they tend to trip on their own attempts to both be true to their muse and craft commercially viable musical nuggets. The attempts to write to a virtual non-existent audience constituted by a demographic tends to defer the honest emissions of a band that writes its own material, and that seems to be the over-arching fate of Seasons After on Through Tomorrow. The talent is here, particularly on the instrumental side, but until Seasons After begin to pursue commercial success on their own terms they may be doomed to repeat the half-measures that seem to plague Through Tomorrow. Through Tomorrow is decent, but not what it might have been.

Learn more about Seasons After at http://www.seasonsafter.com/. You can purchase Through Tomorrow from Amazon.com as either a CD or Download.
Posted by Wildy at 5:00 AM

I don't know man. This album has been playing in my car for at least 3 weeks now and it only gets better with each listen. I do agree with you that Cry Little Sister isn't the strongest song on the album but that's only because most of the other songs are even better. For a first attempt album I would definitely give this album a 4 out of 5.

5 outa 5 and I've been listening for three years now. Chris is no longer in the band but his message is clear... He speaks of his birth into Christian faith! It is very clear if you can interpret his words...