Review: Brian Pounds - After You're Gone 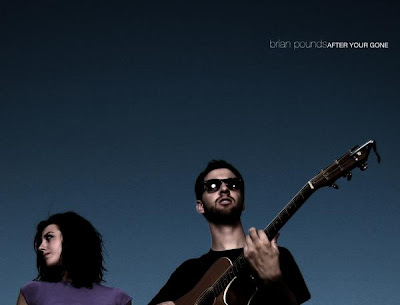 Austin, Texas-based singer-songwriter Brian Pounds might be young, but the twenty-year old brings a level of reflection to his songwriting that’s uncharacteristic for his age. His debut album, After You’re Gone, looks at love and loss with the eye not just of someone who’s lived it, but come to some sort of philosophical peace with both concepts. Working with producer Dave Wiley (Alpha Rev), Pounds has constructed an album filled with both solid songwriting and panache all while still trying to figure out who he is musically.

After You’re Gone opens with “Tired”, a light rock tune infused with elements of R&B. It’s a decent start to the album, and Pounds sounds more than a bit like James Taylor here. “After You’re Gone” is a solid, soulful tune. The chorus has a neat, torrential feel that fits the emotive nature of the song in spite of a general laid-back approach. Pounds does get a bit repetitive with the chorus. “Leavin’” is a wolf in sheep’s clothing; a country tune masquerading as a mild rocker. This tune screams for country twang, and sounds a bit emasculated in this straight-up version, but the songwriting is outstanding, and it’s only a matter of time before someone returns this song to its rightful genre.

“Smile” is a pleasing bit of Americana with a solid arrangement and a pleasant vocal. This song is keeper and is likely to be something of a fan favorite. “Don’t Waste My Time” doesn’t; a decent tune you’re likely to enjoy but which will likely fail to make a lasting impression. Pounds seems most at-home with the singer/songwriter styling of “In The Morning”. He has spent most of the album to this point trying to be and do things that don’t fully fit. On “In The Morning” Pounds thoroughly embraces his roots This is the best all-around performance on the disc. “Mistakes” is a melancholy song of regret that’s sonically pleasing Pounds closes with “Faith”, a needful side of acoustic pop; a solid tune that sounds exposed in this stripped down arrangement.

After You’re Gone is a solid exposure to the world of Brian Pounds. Pounds displays some talent as a songwriter, and has a voice that’s pleasant to listen to. Pounds is still trying to figure out exactly what his sound is, and that’s apparent on After You’re Gone. He seems most at home in the pure singer/songwriter material, but is struggling to find ways to make it sound more hip or modern. While that is admirable, it is often best to go with your strengths and not try to turn them into something they’re not. When Pounds offers himself up, unadulterated, After You’re Gone takes on an honest simplicity that’s endearing. The material where Pounds is trying out other sounds works to a point, but it doesn’t have the same blush of authenticity.

Rating: 3 Stars (Out of 5)
Learn more about Brian Pounds at www.myspace.com/brianpounds. After You're Gone is available as either a CD or Download from CDBaby.com.
Posted by Wildy at 6:38 AM