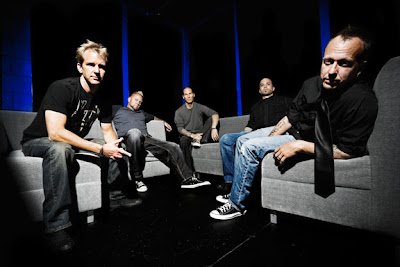 Lo-Pro - The Beautiful Sounds Of Revenge
2010, My Rocket Science

On May 25, 2010, Southern California rockers Lo-Pro return with their sophomore album, The Beautiful Sounds Of Revenge. After achieving radio success with the song "Sunday" from their 2003 self-titled debut. Several years of languishing in label purgatory left Lo-Pro uninspired, but a series of acoustic gigs with Staind front man Aaron Lewis left the band energized, an energy that carried over into the songwriting and recording that led to The Beautiful Sounds Of Revenge. Featuring front man Pete Murray, guitarist Pete Ricci, guitarist Neil Godfrey, drummer Tommy Stewart (Godsmack) and bassist Jerry Oliviera, Lo-Pro had to overcome geographical separation to take this next step (Ricci lives in Massachussets and the rest of the band are scattered around California). The resulting effort is both meaty and commercially driven.

The Beautiful Sounds Of Revenge opens with "Blame Me", a highly commercial and radio-ready rock n roll song with a dark timbre. "Blame Me" is a bit generic for the Modern Rock market; it sounds good for radio but may have a hard time standing out in a crowded marketplace. "Texas" suffers from the same general feel. In fact, much of the album has a highly glossed and banal feel. Technical proficiency abounds on The Beautiful Sounds Of Revenge, but there is little here that truly sounds inspired. "A Life That's Just Begun" fits into the big power ballad category but fails to stand out. "Ingenious" shows some signs of life; active and full of a dark musical energy, and "Hang On" pushes the envelope a bit further. Here Lo-Pro shows real pop sensibility with a big rock chorus. It's a step in the right direction but not fully dynamic. Likewise, "Early Morning Anger" shows signs of hope. The song is a vibrant rocker but the vocal line is a bit too compressed within the layered instrumentation. As a listener you'll sit patiently waiting for Pete Murray to really let go and soar vocally, but that moment never materializes. The layered sound carries over to "Breathe", a decent bit of lyric rock n roll that's among the best songwriting on the disc. Lo-Pro closes with the bland and lifeless "Letting Go", an attempt at a power ballad that simply falls flat.

Lo-Pro has a few solid moments on The Beautiful Sounds Of Revenge, but never really gets off the ground with a sound that's just too much like too many other bands clogging the Modern Rock Radio genre. Technically the band is very solid, but vocalist Pete Murray just doesn't come across as a rock n roll front man on the CD. Sound often takes the place of energy on The Beautiful Sounds Of Revenge, making the music sound ineffectual at times. This is not the impression that a big rock band wants to leave with listeners.

Learn more about Lo-Pro at http://www.lopromusic.com/ or www.myspace.com/lopromusic. The Beautiful Sounds Of Revenge drops on May 25, 2010. Keep checking Lo-Pro's website for availability and release information.
Posted by Wildy at 6:00 AM

While I found this review to be professional and fair, I'd like to take a second to encourage anyone reading this to listen to the CD and decide for themselves. While Lo Pro doesn't do anything drastic to set themselves apart from mainstream rock bands, besides make really good music, I believe that is one of the reasons they have developed such a loyal fan base.

If you have ever had the pleasure of seeing this band perform live, you know as well as I do that Pete Murray's voice is spectacular. Unlike some rock bands, who have the studio to thank for their sounds quality, Pete's voice needs no enhancing. I had the honor of catching his acoustic performance with Aaron Lewis of Staind (Who, by the way, isn't a very flashy front man either, but still maintains an adoring fan base) here in DC a few years ago. Lo Pro's acoustic performance shocked me and left me craving more. Pete's powerful voice literally gave me chills.

Take the time to investigate this band for yourself. When's the last time you ever paid attention to the flamboyance of a band's front man and based your music selection on that alone? If you are looking for over-the-top, go listen to Hinder. If you are looking to discover a new, upcoming band with serious musical talent and intelligent lyrics, give Lo Pro a try. Bet you won't be disappointed!