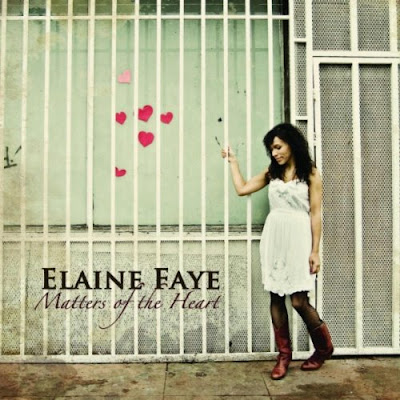 San Diego’s Elaine Faye is a born-and-bred California girl with a big soulful sound who’s been turning some heads in the San Diego area. Faye considers the road her home, having moved over twenty-seven times and living a nearly nomadic life.” Like many artists, Faye’s musical roots began in her childhood church. Her personal life was full of much more in the way of drama, with a father sent to jail and a mother who passed away while he was incarcerated. Above all, Faye is a survivor. Based on the back story, you might be justified in expecting a lot out of Faye’s debut album, Matters Of The Heart.
Matters Of The Heart opens with “Just Want You”, showing off a distinctive voice on a repetitive and derivative song. You’ll remember this one because it will likely be the first time you heard Faye’s voice, but the song itself will pass from memory quickly. A similar vibe exists on “Gave Me Away” and “Melt For You”. “Don’t Miss Out” finds Faye raising the level a bit vocally, but the song itself sticks with the same bland, lifeless feel. Faye finds better traction with X’s and O’s, a lively song that works in a more stripped down setting. It’s almost as if Faye is vocally repressed by greater depths of instrumental layering. When an arrangement gets down to the roots, Faye is suddenly freed and she really shines both in sound and animus. Faye maintains the energy level and adds a lyric component on “Remind Me To Breathe”. “Sometimes” and “Past Loneliness” close out the album at the newer level of vibrancy.

It takes a while for Elaine Faye to hit her stride on Matters Of The Heart. Once she does, it’s a solid effort. The first three to four songs can border on being a tough listen. Faye has a voice you’ll want to listen to; a natural sound that has the meaty alto that goes well with the blues and a suppleness that allows Faye to do almost anything she can stretch her range to. Ultimately it’s the material on Matters Of The Heart that doesn’t always live up to the artist. When Faye is on, the album works very well.

Learn more about Elaine Faye at http://www.elainefaye.com/ or www.myspace.com/elainefaye. Matters Of The Heart is available as a download from Amazon.com.
Posted by Wildy at 5:10 AM