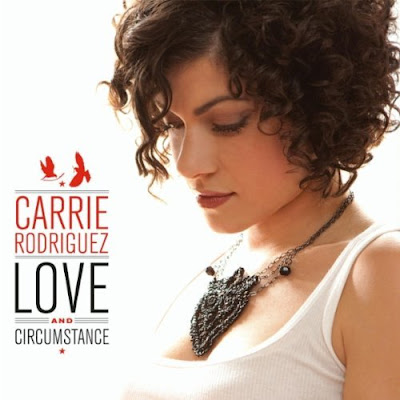 Over the past decade Carrie Rodriquez has gone from being a top notch session violinist to one of the most talented and sought after performers of Country music; the main reason being that Rodriguez eschews the plastic tendencies of commercial country radio for a sound that's true to her own tastes and history. We first became familiar with Rodriguez because of 2008's She Ain't Me, an album that sounded good at the time and simply gets better with age. Rodriguez's 2009 release, Live In Louisville, was so good it wound up in our Top-20 albums of 2009. After eight albums in as many years, Rodriguez returns in 2010 with Love And Circumstances, a cover album featuring songs from some of the best country and folk singer/songwriters of the past forty years.

Love And Circumstances opens with "Big Love" (Ry Cooder/John Hiatt/Nick Lowe/Jim Keltner), a song of hope and yearning that's full of a pragmatic beauty. The song has a rootsy Americana feel that should make it a commercial success. On "Wide River To Cross" (Julie & Buddy Miller) Rodriguez uses her warm voice to invoke the determination of someone making the long journey home after a long time away. It's a gorgeous melody that's moving in its simplicity and grace. "Eyes On The Prize" (M. Ward) has a classic country story song feel that jibes well with Rodriguez's easy vocal style perfectly. Rodriguez captures a sense of tragic hopefulness on "Waltzing's For Dreamers" (Richard Thompson), adding her distinctively mournful violin into the mix as well.

"I'm Not For Love" (Sandrine Daniels) is a heartbreaker, written from the perspective of one who's been burned too many times. Rodriguez highlights the song with a voice that emotes tragic beauty and a world-weary mien, and Bill Frisell's guitar work completes the sound. Rodriguez hits gold with her take on Merle Haggard's "(Today) I Started Loving You Again". The dark textures of her voice wrap around the melancholy feel of the medley in this song, creating a sense of time and place that is palpable. One of the highlights of the album is Townes Van Zandt's "Rex's Blues". Aside from her voice, Rodriguez has an inspired energy in this song that shines through every nook and cranny. Whatever the inspiration, it burns beneath the surface but you can't fail to hear it. The most moving song on Love And Circumstances is Rodriguez's interpretation of the Hank Williams classic "I'm So Lonesome I Could Cry". Rodriguez invests the song with a believable sense of loss, and the bluesy guitar interplay is a nice touch. Rodriguez closes with "La Punalada Trapera" (Sosa Tomas Mendez). It's a gorgeous tune, and the weight of the story is meted out in the deliberate guitar work that fills out the song.

Learn more about Carrie Rodriguez at http://www.carrierodriguez.com/ or www.myspace.com/carrielrodriguez. Love And Circumstances is available as either a CD or Download from Amazon.com.
Posted by Wildy at 5:10 AM