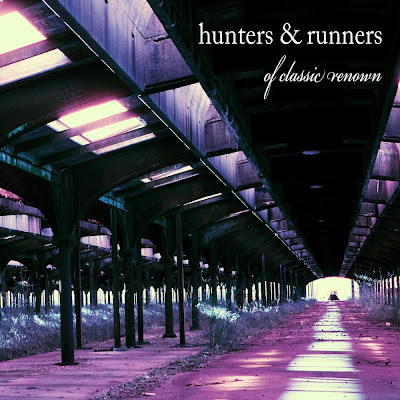 New York City-based Hunters & Collectors have their musical roots at Syracuse University where co-vocalists Brady Oh and Liam Farrell formed The February along with drummer Ryan Raichilson, generating a self-titled album and a solid local following before graduation broke up the band. Oh and Farrell continued to play and write together along with bassist Zack Rubinfield, resulting in a five-song EP entitled The Broke Album. It wasn't until 2008 that the band reunited with Raichilson in New York City, taking the name Hunters & Runners. In March of 2010, Hunters & Runners released their debut album under the new name. Of Classic Renown draws on such diverse influences as rock, punk, country, jazz and reggae, delivering a truly eclectic listening experience.

Of Classic Renown opens with "Bring Your Own", a crunch-smooth bit of Rock N Roll. The vocals are highly distinctive; not pretty but very original and intriguing. There's a mellow vibe to the song that belies the significant amount of energy that runs beneath the surface of the song. "The Sims" is a garage rock anthem for 2010 with a great vocal line. The song is eclectic to say the least, veering all over the map in a style that approaches histrionics. "I Used To Be Lonely" can be a tough listen, trying to delve into more emotional waters but sounding ultimately a bit on the whiny side. Hunters & Runners recovers nicely with "Father's Porsche", a highly entertaining mix of 1960's rock 'n roll and Americana with a dynamic vocal line and pleasing vocal harmonies. "Sociology" is a pop song with a punk heart; catchy and memorable and a potential impact single. Baby's Eyes falls into a near-stream-of-conscious exploration in reggae form. It's an interesting sonic tidbit but one that quickly loses its novelty.

The songs we've covered so far would clearly fall onto "Side A" back in the days of vinyl, both for album position but also for the quality of songwriting and performance. The remaining songs on Of Classic Renown would logically (and deservedly) fall onto "Side B". What works for Hunters & Collectors on the first half of the album disappears into the aether on the second half of the album. "All Right Woman" and "Soon" are bland, while Badman lacks both the energy and charm of earlier tracks. Hunters & Runners tries to rally with "Die", a quasi-punker tune full of vitriol that seemingly can't decide if it wants to be angry or obtusely humorous. Of Classic Renown closes with America, a sophomoric and crude anthem lacking both the charm of humor or the angry heart of a punk rock song. Without either quality the song takes on the air of a parody that doesn't reflect well on Hunters & Runners.

Of Classic Renown really have best served Hunters & Runners as two separate EPs, one to be released and one to be buried in the band's masters for later mining. Hunters & Runners show real promise as a band, but it seems perhaps that the material here wasn't culled enough in the aim of putting out a full length album at all costs rather than putting out a shorter EP chock full of high-quality songs. That's not a knock on the band, but there is a distinct difference between the two halves of the album in quality and depth of songwriting. Hunters & Runners definitely has the chemistry to do some special things.

Rating: 2.5 Stars (Out of 5)
Learn more about Hunters & Runners at http://www.huntersandrunners.com/ or www.myspace.com/huntersandrunners. You can purchase Of Classic Renown on CD directly from Bright & Barrow Records; downloads are available from iTunes.
Posted by Wildy at 6:01 AM