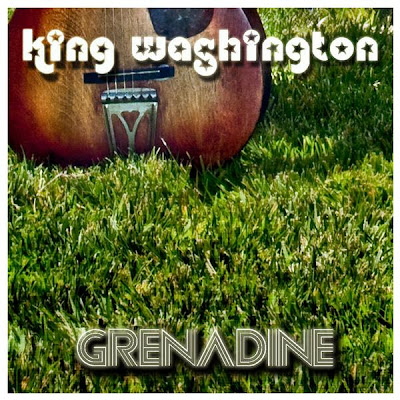 Los Angeles quartet King Washington come ready to rock, but they're in it for the aesthetics as well. All four members are seasoned vocalists, and the harmonies flow freely throughout the band's album Grenadine. You'll hear influences ranging from The Talking Heads to the Beach Boys, with health dollops of Bowie and Radiohead thrown in for good measure. A heavy emphasis is placed on the construction of songs, treating them not just as vehicles with a message but as works of art.

Grenadine opens with "I Get By", featuring a strong 1960's vibe with strong nod to The Beatles. It's a great opening tune that will get stuck in your head, and you may even find yourself wondering if someone finally unearthed a new Beatles track that lay hidden for four-and-a-half decades. "Angela" keeps the same feel in a highly danceable number with strong vocal harmonies and an iconic lead vocal from Tyson Kelly. King Washington slows things down a bit with "Live On", a sweetly arranged tune about stopping to smell the roses. The song features great lyric guitar work inside a layered arrangement. Things take a darker turn with "Why", a melancholy, pensive song that has a nice melody but is a bit too drawn out for its own good. "The Cobbler" is likely to be a concert favorite; an upbeat tune that's out of the box and full of joy. Grenadine winds down with an Oasis-like melancholy wine on "The World". The repetitive nature and passive nature of the song don't tag it as a natural closer, and the song feels out of place on the EP.

King Washington clearly have a sound that is going to draw serious music fans; they also have a sound that may drive some away. Grenadine features a band that is of two minds and trying to figure things out. At their best, King Washington creates magical fuzzy pop songs the likes of which haven't been heard in some time. At their worst, the band becomes mired in their own melancholy and misses the connections they are so capable of making. Grenadine is a mixed experience with more pluses than minuses; it's worth checking out for King Washington's finer moments.

Learn more about King Washington at www.myspace.com/kingwashington. Grenadine may be purchased digitally from iTunes.
Posted by Wildy at 5:46 AM