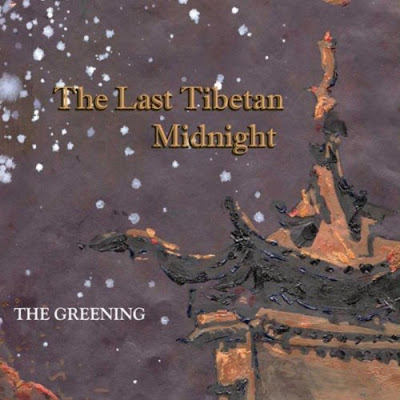 San Francisco rock trio The Greening dropped their debut album, After Shoal Parlor in 2003, creating quite a buzz in California over time with a mix of oddly-placed shows and a sound based in the beauty and violence of creation. The band constructed their own studio and set to writing and recording new material in 2009, culminating in the release of last year's (She's So) Electric EP. All told, The Greening wrote and recorded twenty songs, ten of which see the light of day on their most recent album, The Last Tibetan Midnight. (The other ten will be released in 2011, but will get proper airings during live shows between now and then). On The Last Tibetan Midnight, The Greening creates art devoid of cookie-cutter musical imprints.

The Last Tibetan Midnight opens with "Black Lotus", a chaotic number that seems to slip in and out of reality. Shifts in style, meter and sound are as random in occurrence as they are seismically varied, with a sonic nod to The Doors. "Belong Me" carries over from the (She's So) Electric EP as a welcome resolution to the chaos of "Black Lotus"; a poppy love song reminiscent of the middle ground between Ben Folds and The Beatles. If the sing-along nature of the chorus doesn't grab you, the instrumentation and vocal harmonies will. The Greening is struck by lyrical elephantiasis on "The Tangerine Floating In Ink", where the verses last too long and don't flow well, but the chorus is strong, the harmonies are true and the instrumental breakdown is worth sitting through the verses for.

The Greening plays with multi-part song construction (ala The Beatles) on "Sleeping Grandpa Tacoma" while incorporating that would bring happy tears to the eyes of Brian Wilson. Not content with all this useless beauty, The Greening upend the serene nature of the song with chaotic percussion underneath, suggesting a worldly duality-cum-chaos that lies beneath the placid surface. "Better Days" and "Winter Sunshine" are both solid, although both are prone to a less cohesive style of play than the rest of the album. The Greening sound a bit like vintage They Might Be Giants at the opening of "Don't Have The Time", but the arrangement becomes more open and fluid as a lyric ballad before opening the throttles as a quasi-big rock song. It's a decent tune, but the fluidity and grace of the dance through different styles is intriguing.

While often eschewing the pure form in light of more challenging variations, The Greening does pure pop quite well. "Sunday Afternoon" dances with the aesthetic without giving up the vaguely psychedelic approach that runs through the heart of The Las Tibetan Midnight. "Sunday Afternoon" is the tune most likely to end up on repeat. "(She's So) Electric" is a barn burner with real pop finesse built around a classic lick. Moody Blues fans will find a lot to like in this tune that nods to the old without losing a sense of the new. The Last Tibetan Midnight closes with the Floydian psychedelia of "Thought I Told You". The song is not a classic closer, but works well in contrast to the rest of The Last Tibetan Midnight. While seeming initially out of context, the more you listen to The Last Tibetan Midnight the more you realize that this is where The Greening was leading you all along.

Learn more about The Greening at http://www.thegreening.com/ or www.myspace.com/thegreening. You can purchase The Last Tibetan Midnight as either a CD or Download from Amazon.com.
Posted by Wildy at 6:48 AM

Labels: Brian Wilson, The Beach Boys, The Beatles, The Doors, The Moody Blues, They Might Be Giants