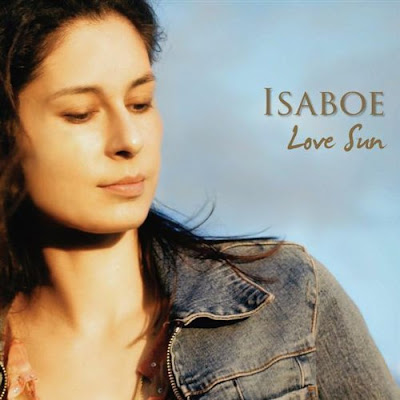 Australian singer-songwriter Isaboe had her first musical indoctrination at the age of 5, learning to play paradiddles on her father's 1950's Ludwig drum set. The days of youth quickly ran away with Isaboe, but the music beckoned her back and at the age of 14 Isaboe discovered The Police, bashing her way through Stewart Copeland's manic percussion and finding a sense of utter joy. Next came the guitar and saxophone and the discovery of jazz. Before long Isaboe was writing up a storm. In 2006 she set out to record an album. Two years later, after re-writes, a hiatus and time off from work to complete it, Isaboe released her debut album Love Sun. Full of personal reflections and empowering images, Love Sun serves as a powerful yet frustrating introduction to the world of Isaboe.

Love Son opens with "Brightest Love", an upbeat-yet-mellow rock love song with orchestral undertones. Listeners may be reminded of a blend of Aimee Mann and The Moody Blues here. The orchestral pop continues on "Calling To You", a song about seizing the moment where love is concerned. "Future World" continues unfettered with a light electro beat beneath Isaboe's ethereal vocals. Isaboe draws on themes of universal consciousness and connection in a somnolent piece that lingers across four-and-a-half minutes. Isaboe gets too caught up in prose on the title track; "Love Son" plays more like a diary entry than a mellow pop song.

"Golden Year" is a mildly upbeat song of reminiscence that seems to shake Isaboe out of her torpor. The energy carries over into "Revelation", an acoustic/electric track that decries the state of humanity and aims toward a more spiritual state for mankind. Isaboe's prose gets the best of her again on "Stellar Child", a song so caught up in Isaboe's new-age lyrical wash it forgets to grow and flourish as a song. Isaboe saves her best work for late in the album; "Home" is a love song that sits a bit outside the traditional love song box but carries a lovely, ethereal arrangement and melody and is likely to be a favorite for most anyone who comes across it. Love Son closes with "For All Our Days", a more traditional love song that sinks back into Isaboe's complacent, ambient pop arrangement style.

Love Son is something of a confounding album. Isaboe has a wonderful voice, and a keen ear for melody, but her tendency to arrange most everything with a monochromatic acoustic/orchestral pop style makes the bulk of her songs sound like one long cycle. There's a lot of potential displayed on Love Son, but Isaboe really struggles to maintain her pop sensibility under the weight of ambient but not energetic songwriting.

Learn more about Isaboe at http://www.isaboe.com/ or www.myspace.com/isaboeofficial. Love Son is available digitally from e-tailers such as Amazon.MP3 and iTunes.
Posted by Wildy at 6:10 AM