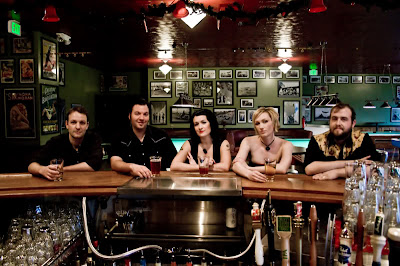 Denver, Colorado Alt-Country band The Hollyfelds came to our attention a couple of years back with their album Saratoga, a charming cycle revealed a subtle and talented band with two amazing vocalists (and multi-instrumentalists), Eryn Hoerig and Kate Grigsby out front. Last year's Black Heart Blue EP was a continuation of the magic displayed on Saratoga, although there was at least a suggestion there that The Hollyfelds were headed for slightly darker waters. With the release of Lo Bueno, Lo Malo, Lo Feo on May 22, 2010, it would appear that The Hollyfelds have committed to their course. The Hollyfelds recently sent along a two-song preview EP from Lo Bueno, Lo Malo, Lo Feo; here’s what we heard.

“Either Way” is the sad and melancholy soundtrack to life in a honky-tonk. Hoerig and Grigsby are exquisite as always. “Either Way” is a catchy tune that could play well in a classic country format; unvarnished music with first class musicianship. “How To Be Gone” is decent but lacks the usual energy level you’d expect from The Hollyfelds. The song is well written, but there’s almost a sense of complacency here that isn’t entirely explained by the subject matter.

Two songs is a very short sample of an album (and sometimes even of an EP). From the songs presented, it would suggest that Lo Bueno, Lo Malo, Lo Feo aims to be a solid effort, but perhaps not as inspired as some of The Hollyfelds earlier work. Reserve judgment on the full album until more songs become available. What we’ve heard so far is rather good, but The Hollyfelds have set the bar so high with their past work that what might be really good for one band is fair for them.

Rating: 3 Stars (Out of 5)
Learn more about The Hollyfelds at http://www.thehollyfelds.com/ or www.myspace.com/thehollyfelds. Lo Bueno, Lo Malo, Lo Feo drops on May 22, 2010. Keep checking The Hollyfelds' website for availability.
Posted by Wildy at 5:50 AM