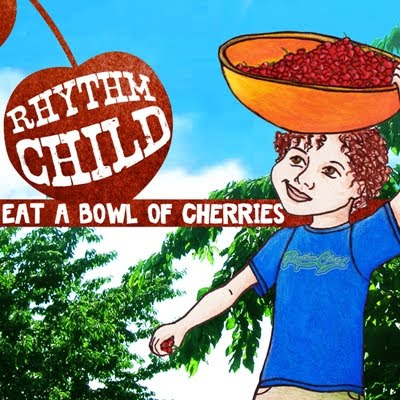 Norman Jones cut his teeth over a decade with Reggae/Ska Band Crucial DBC before joining The English Beat's Dave Wakeling in The Free Radicals. A stint with General Public was to be before Jones headed off in a new direction. Inspired by the birth of his son Bailey, Jones decided he wanted to write music that would engage children but be enjoyed by parents as well. He formed the band Rhythm Child with wife Heather, and grew two other members (Bailey and Andre). Since that fateful decision Jones has won a John Lennon Songwriting competition Grand Prize as well as placing as a finalist. Rhythm Child's latest album Eat A Bowl Of Cherries spawned a #1 song on Sirius/XM Kids Radio as well as current or upcoming placement on two separate Putamayo compilations.

Eat A Bowl Of Cherries opens with "Riding On The Bus", Rhythm Child's take on "The Wheels On The Bus". It's a funky and soulful re-interpretation that uses the original as more of a guide than a song to cover; the result is very enjoyable and will work for both parents and kids. "Sam The Lamb Blues" is "Mary Had A Little Lamb" re-imagined as a blues song. The arrangement is solid, and the Hammond Organ work is exquisitely done. "Bowl Of Cherries" is catchy soul that hints at both zydeco and jazz without ever quite making the break. The song is a bit repetitive but is a fun listen. Rhythm Child misses a beat with "Everybody Is The One", but hits the mark with their take on "Supercalifragilisticexpialidocious" in a funky acoustic guitar-driven arrangement that will make you want to dance.

Rhythm Child strives for a positive message that comes off weak in "Misunderstandings", but makes a soulful dance number of "Oh Susanna" in one of the biggest highlights of the album. "Shaker Song" will have everyone from the toddlers to grandma dancing and shaking their booty. Rhythm Child closes on a couple of awkward notes with the reggae behavior modification anthem "I Can't Play Today" and the repetitive and banal "Cab We Still Be Friends".

Rhythm Child makes a strong impression with Eat A Bowl Of Cherries, a generally very positive collection of songs that crosses generational gaps to be enjoyable for children of all ages. Rhythm Child does hit a few rough spots along the way, but there's enough good material here that you'll be happy to pick up the album and just edit out the chaff on your playlist. Rhythm Child might be one of the more entertaining children’s/family artists this side of Trout Fishing In America.

Learn more about Rhythm Child at http://www.rhythmchild.net/ or www.myspace.com/rhythmchildnetwork. You may purchase Eat A Bowl Of Cherries from Rhythm Child's webstore, or as a digital download from iTunes.
Posted by Wildy at 5:34 AM