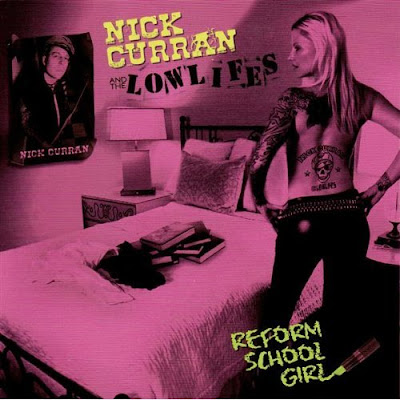 Austin, Texas-based Nick Curran has made quite a stir in the world of roots music. His debut album, 2004's Dr. Velvet won the W.C. Handy Award (AKA The Blues Music Award) for "Best New Artist Debut", leading to all sorts of positive press and a stint on HBO's True Blood. Along the way, Curran spent three years playing with Jimmie Vaughan of The Fabulous Thunderbirds, and gained a reputation as one of the most hard-charging guitarists in his genre. Curran recurs with his new band The Lowlifes on the brand new Reform School Girl, recently released on Electric Groove Records.

Reform School Girl opens with "Tough Lover", a blend of Rock, R&B and Bop. Curran gets a bit derivative, invoking Lil Richard in his vocal styling while throwing in references to Elvis Presley and Jesse James (the outlaw, not the idiot), but the song is a delightful romp of old school fun and modern poetry. "Reel Rock Party" is barrelhouse blues and rock n roll. The song is entertaining, although the heavy vocal effects are more of a distraction than a boon. "Reform School Girl" is a bit kitschy, with a pure 1950's style that will mesh uneasily with the more modern subject matter for some oldies fans. The rest of the album is much the same, whether on big catchy pop/rock tunes such as "Sheena's Back", "The Lowlife" or "Lusty Lil' Lucy", or more mundane tunes like "Dream Girl" or "Filthy".

Curran has a great voice for the art form, and his band is as tight as they come. Reform School Girl takes a beloved form for older baby-boomers and mixes it with a burlesque sensibility that may make it a tough sell to the folks who generally listen to 1950's music. Curran is obviously aiming for a lower common denominator. The songs are strong and well written; but it seems likely that the demographic for this material is a very narrow band that could easily be missed. Curran gets a lot of points for creativity and showmanship, but something here rings a bit hollow nonetheless.

Learn more about Nick Curran & The Lowlifes at http://www.nickcurran.com/ or www.myspace.com/curranrocks. Reform School Girl is available from Amazon.com as either a CD or Download.
Posted by Wildy at 5:00 AM

If you are looking for new Band Fundraising Ideas I strongly recommend you get in touch with Easy Fundraising Ideas. They have a very wide assortment of fundraisers that have been used successfully throughout the United States.