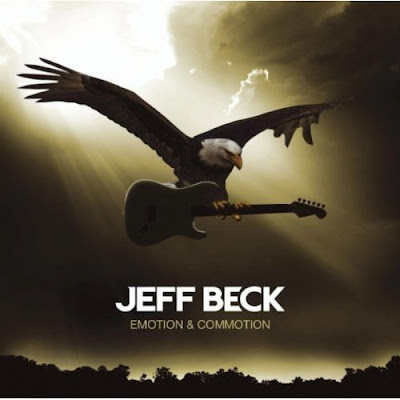 What can you say about a guitar player who was good enough to replace Eric Clapton? Jeff Beck has achieved legendary status in the world of rock n roll, having played alongside folks such as Jimmy Page, Jon Paul Jones, Rod Stewart, Ronnie Wood, David Bowie, Hans Zimmer, Paul Rodgers and Carmine Appice. Pink Floyd even wanted Beck to replace Syd Barrett but were never brave enough to ask him. Beck has been both lauded and derided for his flashy guitar style over the years, but he has also not sat on his laurels, which include five gold and two platinum albums and three Grammy Awards. Jeff Beck takes another expansive step with his latest album, Emotion & Commotion, due out on April 13, 2010 on Deuce Music Ltd./ATCO.

Emotion & Commotion opens with the serene and mellow “Corpus Christi Carol”, showing deep nuance and strong melodicism. “Hammerhead” is much more lively; a guitar-led instrumental that lapses into a languorous state. “Never Alone” is similarly somnolent, but fits in with a beautiful arrangement. Beck tackles the Harlen/Harburg classic “Somewhere Over The Rainbow” in one of his most lyric and gorgeous performances on the album. On “I Put A Spell On You”, Beck plays second fiddle to guest vocalist Joss Stone, who thoroughly makes the song her own. Beck provides a brilliant secondary voice here, showing a wonderfully reserved style of play that ties the song together like a finely wrapped gift. On “Serene”, Jeff Beck’s guitar mingles with the voice of coloratura soprano Olivia Safe to create moments of abstract beauty.

Imelda May adds her sultry alto to the mix on “Lilac Wine”. This may not be the most dynamic performance on the album, but it is the most riveting as May and Beck mix it up in gentle undertones. Beck takes a Malmsteen turn on “Nessun Dorma” from Giacomo Puccini’s Turnadot. Beck performs with a full orchestra, choosing a very refined role for his guitar. Joss Stone comes back for one more turn on “There’s No Other Me”. Stone and Beck each are great on the song as a solo performer. As a duet, this song goes sadly awry, as there’s no clear indication that Beck and Stone are actually playing together. Stone in particular knocks it out of the park with a thrilling vocal performance, and Beck hits all of the right notes, but there’s little sense that either considered the other as part of the performance. Emotion & Commotion closes with “Elegy For Dunkirk”, with Olivia Safe providing her vocal talents once again. “Elegy For Dunkirk” is a tough closer, more focused on plodding notes than any real sense of progression. Safe is exquisite, as expected.

Emotion & Commotion is a solid if inconsistent effort. Jeff Beck has heard the criticism over the years of being too flashy, too fast, etc., and appears to be determined to undue those criticisms on Emotion & Commotion. If anything, Beck over-compensates at times, drawing out notes and phrasing to a point where the concepts of progression and melody become lost. Beck is a fantastic guitar player at base, and proves it throughout much of the album, but the highly lyric sensibility of the album may not sit well with fans of his older material. On the whole, Emotion & Commotion is worth listening to, but isn’t likely to go down among Beck’s best.

Learn more about Jeff Beck at http://www.jeffbeck.com/. Emotion & Commotion is available as either a CD or Download from Amazon.com. There is also a special edition that includes a DVD and a Japanese pressing with two bonus tracks.
Posted by Wildy at 6:03 AM