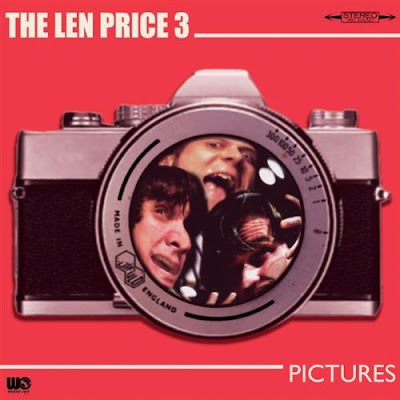 Little Steven Van Zandt's Wicked Cool Records dropped a musical love bomb on the western hemisphere with the release of The Len Price 3's third album, Pictures, in January of this year. Using analogue equipment and roots that run to bands like The Who, The Beatles, The Kinks and The Prisoners, The Len Price 3 have created their most sonically challenging and pleasing work to date. Pictures shows the melodic brilliance of Brit Pop with the edgy darkness and humor that characterized early Who recordings. Pictures was produced in committee by The Len Price 3 with the help of Jim Riley, Graham Day, Kris Harris and Little Steven.

Pictures opens with the title track, a crisp instant classic with nods to British Punk but a real pop sensibility. “Keep Your Eyes On Me” has a tremendous melody and pacing, sounding a bit like They Might Be Giants working as a Beatles tribute band. This song will definitely get stuck in your noggin. It’s a song about the lack of perspective that follows stardom, particularly when the lights aren’t quite so bright anymore. “The Girl Who Became A Machine” is a delightful punk/pop blend with a chorus reminiscent of something between The Who and The Kinks; it’s a brilliant tune that runs exceedingly short at 2:19. The Beatles references will continue on “After You’ve Gone”, where The Len Price 3 stick with the same style of quirky melodicism but also a modern touch.

“Mr. Grey” is a powerful observation on society; a song about getting all you want only to realize it’s not what you wanted at all. On “If You Live Round Here”, The Len Price 3 head for a different approach, with a more rhythm ‘n blues based sound. “Man Who Used To Be” is a catchy, vibrant rocker about being past your prime. The Len Price 3 get back to the punk aesthetic on “Under The Thumb”, perhaps the best all-around rock tune on the album. Pictures winds down awkwardly with “The Great Omani”. It’s a decent enough song, but very much out of place in this collection.

The Len Price 3 offer up a varied and dynamic approach to songwriting on Pictures, a well-rounded rock album with punk roots that run deep, but also a serious pop sensibility you won’t be able to ignore. There are a few bumps along the road, but Pictures seems likely to expand the reach of The Len Price 3.

Rating: 3 Stars (Out of 5)
Learn more about The Len Price 3 at http://www.thelenprice3.com/ or www.myspace.com/thelenprice3. Pictures is available from Amazon.com as a CD, Download or Vinyl LP.
Posted by Wildy at 7:00 AM

Labels: Little Steven, Steven Van Zandt, The Beatles, The Kinks, The Len Price 3, The Prisoners, The Who