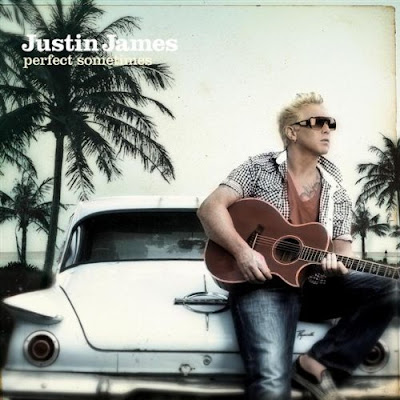 Sometimes it takes a tragedy (or near-tragedy) to open doors. So it was for California surfer/singer/songwriter Justin James. James suffered a shark attack several years ago, losing massive amounts of blood and setting him up for a year-long bout of recovery and rehabilitation. The gift of an acoustic guitar during that time became James’ greatest passion, and a new path was born. James celebrates the remaking of himself with the release of his debut album, Perfect Sometimes in 2010.

James shows the potential to be an entertaining and engaging performer on Perfect Sometimes. Opening with the title track, a catchy, silly little love song that’s a perfect introduction, James establishes himself in the same vein as John Mayer and Jack Johnson. The only down side to this is that it becomes very apparent at points throughout the album that a fair amount of digital manipulation of James’ voice is occurring, making it difficult to know what is live and what is AutoTune. “Beautiful Crime” is radio-ready pop with elements of soul and a light dance beat. The song is a bit formulaic but is a likely winner at pop radio. “Stay Close To Me” is also highly radio friendly, featuring a killer hook and a sound that will have John Mayer fans doing a double take the first time they hear it. James hits a rough patch in the middle of Perfect Sometimes, with tracks such as “Sometimes”, “Deeper Waters” and “Missed Again” coming off a bit bland.

James makes something of a comeback on “You Don’t Know Me”, a lively mid-tempo rocker with a decent hook and perhaps a small commercial upside. “Moonlight” is a dreamy samba that sounds nice but carries no emotional weight. James’ finest moment comes on "Gypsy Girl", a highly enjoyable song delivered in a solid Americana arrangement. Perfect Sometimes bows with “On My Way”, a sweet pop song that bookends the album well. This is one of those tunes that doesn’t bowl you over, but goes down as easily as a cool drink on a warm summer afternoon. It leaves listeners with a good last impression.

Justin James shows flashes of what he might become on Perfect Sometimes. The songwriting is a bit uneven throughout the album, but James’ better moments are definitely worth checking out. Don’t be surprised if James sees modest commercial success out of Perfect Sometimes, but there is real growth potential here. It will be curious to see where James goes next.

Rating: 3 Stars (Out of 5)
Learn more about Justin James at http://www.justinjames.com/ or www.myspace.com/justinjames. Perfect Sometimes is available as either a CD or Download from Amazon.com.
Posted by Wildy at 5:00 AM