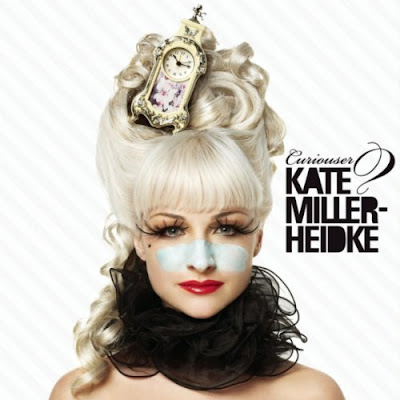 Folks who have taken in one of the shows on Ben Folds current tour have been confronted with a highly intriguing opening act in Kate Miller-Heidke. The platinum-selling Australian chanteuse of the golden hair and platinum voice has wowed crowds here in the US. This is not news in her native Australia, where Miller-Heidke has been a chart presence for some time now. In March of 2010, SIN/SONY dropped Miller-Heidke’s Curiouser on an unsuspecting American populace. The album was released in Australia in 2008 and has subsequently gone platinum there, shooting as high as #2 on the ARIA charts and #1 on the iTunes Australia chart. The reasons for Miller-Heidke’s success are many; the classically trained vocalist can blow out your eardrums with her coloratura soprano sounds as well as twist your mind with some of the quirkiest sounds in either hemisphere. Her songwriting, aided by husband/guitarist Keir Nuttall, runs the gamut from deeply personal emotional fare to absurdly funny observations about the world. Produced by Mickey Petralia (Beck,eels, Dandy Warhols), Curiouser has been hailed as one of the best Australian albums in some time. Don’t be surprised if that conversation drops the “Australian” going forward.

Curiouser opens with the quirky and danceable "The One Thing I Know", a highly unusual and eclectic love song that could easily be classified as a rocker, a pop tune or even club music. At the center of it is Miller-Heidke's beautifully eclectic voice; the one that bends at angles that don't always seem possible. "God's Gift To Women" is certain to become an anthem for the bar set; or anyone else exposed to the unwanted advances of a maroon so full of himself he can't see how deep he's waded in. Miller-Heidke plays like a cross between Gwen Stefani and Nellie McKay in a tune that should be a huge hit if it were ever released as a single. Barring that, you can be certain you'll hear this tune in syndication somewhere. "Caught In The Crowd" is an apology in song; recognition that our behavior as kids is often not what we might hope for as adults. It's a great pop tune that will resonate with most listeners regardless of where they're from.

Miller-Heidke displays some of her trademark humor on "Can't Shake It", bemoaning her own lack of rhythm on the dance floor. The song is funny without stooping to the level of a novelty tune, but also has the temerity to be a high-quality pop tune with a serious dance beat. Things quiet down for the resplendent end-of-the-world daydream that is "The Last Day On Earth". Miller-Heidke shows off a softer side and some serious range in a number that shouldn't be soothing but plays like a lullaby, as the protagonist gains all she's lost in the final moments of creation. "I Like You Better When You're Not Around" takes to task that friend we all have who just can't keep her attention off the details of other's lives. It's a humorous song with some serious songwriting chops behind it; Miller-Heidke displays a deft touch with rapid-fire lyrics and a vocal sound that is truly unique.

"Motorscooter" is a fun tune that may border on novelty and is likely destined for a national advertising campaign. It's Miller-Heidke at her quirkiest; a highly entertaining song you simply have to hear to believe. "The End Of School" is a gentle remembrance of the days of youth and leads into the acerbic social commentary of "Politics In Space", which takes to task the political power structure and particularly the baby boom generation for the political and social misadventures of the world. "Supergirl" is an entertaining and highly danceable bit of pop fluff that could turn into a monster on the dance floor. This is another tune that's likely to be tapped for licensing. "Our Song" is a sweet and rambling tune written out of love. It's the most introspective song on Curious and works as a nice foil to the rest of the album. "No Truck" makes eclectic use of a phrase that's fallen somewhat out of fashion. You'll love the music on this song, even if the lyrics don't necessarily add up Curiouser closes with "Stars", a bonus track for the US release that was included in Miller-Heidke's iTunes exclusive self-titled EP this past winter.

For readers in Australia, Kate Miller-Heidke is old news, but here in the Western Hemisphere she is a new phenomenon. It's too early to say yet whether Miller-Heidke will catch on, but it's hard to imagine how she can't. Curiouser has it all; great songwriting, a one-in-a-million voice and a sound that's mainstream enough to become a hot commodity and eclectic enough to stay one. Miller-Heidke's sense of humor illuminates her songs without becoming the driving force, and her story-telling ability and rapid-fire lyrical sensibility are perfect for a generation raised on sound bytes but longing for something a little bit deeper. Miller-Heidke's music is danceable pop you won't feel ashamed of in the morning mixed with more lyric tunes you'll be happy to sit and listen to all day. And whether her voice is in operatic mode or going through kitschy gyrations most vocalists couldn't even imagine, Kate Miller-Heidke will mesmerize you. Curiouser is a Wildy's World Certified Desert Island Disc. Do. Not. Miss. This. One.

Very interesting review! I'm always impressed with artists who are completely comfortable going outside of the box and being themselves!

I couldn't agree more about Miss Heidke. She has remarkable talent, and she never stops challenging herself. So glad to see she is getting the write-ups she deserves.