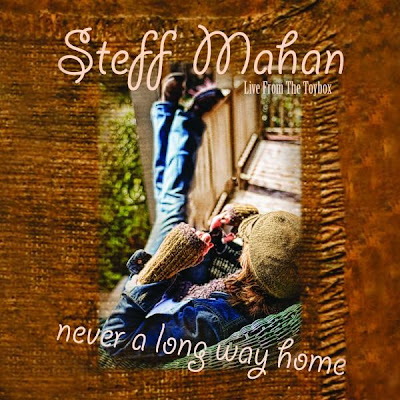 Steff Mahan is a survivor. She's been told she can't be a recording artist/working musician. Either she's too told, too commercial, not commercial enough... all of the various reasons used to discourage an artist. Luckily the true artist never lets such admonishments get in their way. Mahan creates music for herself, but after not really starting her career until the age of 40, Mahan isn't inclined to give up on the dream. It's a good thing, too. Mahan's third album, Never A Long Way Home is her best to date. Mahan sings about aches and breaks of the heart while she puts the pieces together again and moves on down the road.

Never A Long Way Home was recorded live with little or no touch-up work. The approach is fitting for Mahan, an honest and brave step in an age where voices are airbrushed as easily as pictures. Mahan opens with "If I Let You Go", a gritty piece of country rock that's very catchy. Steff Mahan has a wonderful voice that's rough-yet-supple. "If I Let You Go" could do serious damage on the country charts. "Save Yourself" is an altruistic take on the end of a relationship. It's the first of several break-up/just broke up songs on the album. "Can't Hurt Me Anymore" is all about surviving a breakup and moving on. Mahan's backing band eschews the overly-glossed sound Nashville has spun as country music in favor of a classic sound.

"Never A Long Way Home" is a testament to the fact that life is never what we expect it will be; that our personal realities rarely stand up in the face of truth. It's a nuanced and intelligent musical exploration and is gorgeously voiced. In "Forgive Me", Mahan seeks absolution for missed chances. At first the request is of the one she missed out on, but ultimately Mahan seeks to forgive herself. The absolute highlight of the album is "Carnival Ride", a loving tribute to her father based on a childhood memory that turns into a life lesson. The melody and arrangement are beautiful; the lyrics touching without a drop of saccharine.

Mahan explores how loss can linger in "Things I Knew About You". The crux of the song isn't the immediate loss of the person, but the loss of familiarity over time with someone you once perhaps never imagined you'd be without. Mahan conveys a wonderfully world-weary sense of heartbreak conveyed not as volatile emotion but as a quiet, brooding sadness. On "Pray For Peace" Mahan explores the need for peace against the back drop of two distinct struggles: a mother watching her 4 year old suffer and finally praying for it to end, and a mother watching other mother's sons and daughters killed in wartime and praying for an end there as well. The song is heartfelt and likely to be a tearjerker if it touches close to home. "Thought We Were Dancing" is a sad-but-wry song about friendship and how it sometimes turns into love without one or both realizing it. It's a solid tune that may have been a better closer than the actual last song, "When I Need It Most". "When I Need It Most" is a plaintive plea for love and support that just doesn't have the heart of the rest of the album.

The music industry has always had a jaded perspective of age and style. The search is always for next big thing, as long as the next big thing doesn't deviate too much from the current big thing. Steff Mahan is not likely to ever get the respect she deserves from the music establishment, but the songs and performances on Never A Long Way Home certainly deserve some serious attention. It's not a perfect experience, and Mahan wouldn't have it any other way. Never A Long Way Home reflects the bumps and bruises that happen on the road of life, but in the darkness of heartache Mahan sketches out a rough sort of beauty with her words and voice. Never A Long Way Home is the sort of compelling album that will keep you coming back for more.

Learn more about Steff Mahan at http://www.steffmahan.com/ or www.myspace.com/steffmahan. Never A Long Way Home is available through CDBaby.com as either a CD or Download.
Posted by Wildy at 6:02 AM

Every thing you said about Steff is so very true! Her music is from the heart and her lifetime experiences - not just her's but most people who are sensitive to love and heartache. She writes and performs songs that stick to you heart and you go back to when you need reassurance that it "will get better tomorrow". Enjoy the music of this talented lady!