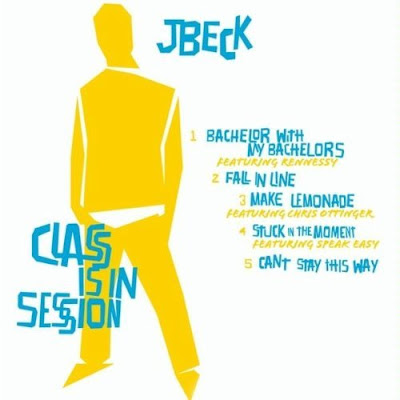 Hip-Hop and rap have had quite the history, starting out as a daring and entertaining form of street poetry set to rhythms, becoming a popularized art form and in some cases a caricature that probably does more to reinforce negative stereotypes than break them down. Like all genes there is both good and bad out there, but it seems that often it's the more blatantly negative influences that get the most press. It's refreshing to find someone like J Beck using hip-hop as an inspirational and life-changing medium. In his day job, J Beck is a teacher on Chicago's South Side. After school hours, J Beck performs his catchy brand of organic hip-hop at venues and events all around Chicago. J Beck's sophomore EP, Class Is In Session, great rhymes and rhythms, a realistic world view and a positive message of non-conformity and hope.

Class Is In Session opens with "Bachelor With My Bachelors"; the expected introductory song that's less than traditional. J Beck dances on the edge of calling out the rap establishment for the lack of intellect in popular rap. J Beck is strong with a rhyme and makes a solid opening impression. "Fall In Line" gets a bit awkward in the bridge, but otherwise deftly combines hip-hop and hard rock in the tradition of groups like Body Count. "Make Lemonade" has more of a commercial feel to it, blending laconic rhymes with the sort of hip-hop-lite that tends to dominate the R&B charts. "Stuck In The Moment" has a bit more life; a positive message about accepting life as it comes and making the most of it. Class Is In Session closes with "Can't Stay This Way", featuring a sample that sounds like the Chipmunks singing backup on a classic soul song. The song approaches a stream of conscious lyrical style, switching between cogent voiceovers and J Beck's commentary that varies from poignant to huh? moments.

J Beck offers honest if sometimes vague assessments of the world around him on Class Is In Session. With a focus on social justice and change, J Beck infuses Class Is In Session with a desire for change as well as a highly personal, sensitive angle not generally seen in popular hip-hop. J Beck seems to be most prolific when he has something to rail against, blending righteous anger with intelligent lyrics. There are a couple of musical decisions here that perhaps do not reflect well on J Beck, but the overall outcome is a positive one. In "Bachelor With My Bachelors" J Beck makes a reference to Mark Twain and Lil Wayne in the same line. Some might be aghast at this grouping, although I suspect Twain himself would have taken a bit of subversive glee at the thought. It's that same subversive spirit that drives J Beck in the pursuit of making the world around him better. Class Is In Session is worth listening to on that basis alone. It will be interesting to see where J Beck goes next.

Rating: 3 Stars (Out of 5)
Learn more about J Beck at www.myspace.com/purposedrivenflow. Class Is In Session is available from CDBaby.com as either a CD or Download.
Posted by Wildy at 6:20 AM