Review: The Gravel Project - More Ways Than One 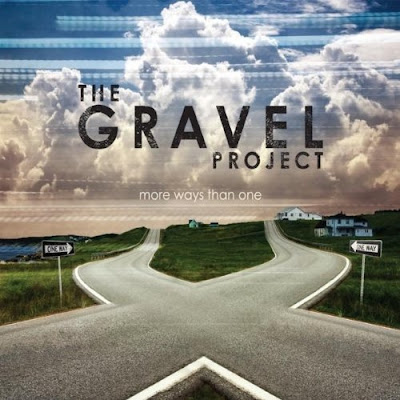 Boston's The Gravel Project is the brainchild of first-call guitarist Andrew Gravel. A Boston native, Gravel previously lived for three years in Australia and then London, where he played with some of the brightest stars on the London Blues scene. Back in the US, Gravel was the guitarist of Entrain before forming The Gravel Project. With their distinctive mix of rock, funk and blues, The Gravel Project have become favorites in Boston, regularly playing to packed houses in venues such as The Middle East, Church and Tommy Doyles. The Gravel Project's debut album, More Ways Than One seeks to capture the live energy of the band in the studio.

More Ways Than One opens with a Muscle Shoals-influenced blue rock paean to the Great Recession and the greed that ignited it in "Dollar Bill". The Gravel Project show themselves to be the total package right out of the gate. Gravel is top notch on vocals and guitar, and the Hammond makes a serious first impression. "Too Many Drivers" is a tongue-in-cheek discussion of who's in charge, sprinkled with innuendo and gentle misdirection that's as entertaining as the great blues/rock arrangement. The Gravel Project finds a bit of magic on "Arugula Politics" with a funky, sassy horn/guitar combo. The song is highly danceable, but The Gravel Project sticks with the theme a bit too long.

"I'll Cry Instead" is an absolutely brilliant Beatles cover done in pure funk. The Gravel Project do the near-impossible with the Beatles classic; they make it their own without compromising the essential character or feel of the original. From The Beatles to Pink Floyd, a David Gilmour ambience is the focal point of "Mindstream", with ambient, dreamy guitar playing the foil to a shifting bed of sound. "My Baby" is a classic-sounding blues love song; it's definite mix-tape material. Gravel nails the vocal line, and the song is eminently listenable even if it does cross the cliché line pretty seriously. More Ways Than One closes with "Blues For L.A.", juxtaposing a lyric vocal line with a gritty blues rock tune.

More Ways Than One turns out to be a highly enjoyable listening experience with a few kinks and wrinkles. The Gravel Project plays tight, blues-influenced rock n roll that explodes with energy. Andrew Gravel is a highly capable front man, driving the band forward with a reclusive yet energetic style that's not to be missed on CD, but is probably best served on stage. Perhaps what is most impressive is that Gravel and his cohorts treat the blending of Blues, Funk and Rock as reverently as if it were its own distinct art form. More Ways Than One is the first stop on a long journey for The Gravel Project. It’s perhaps not an album you will listen to all the time, but it is one you’ll keep coming back to again and again.

Learn more about The Gravel Project at http://www.thegravelproject.com/ or www.myspace.com/thegravelproject. More Ways Than One is available from CDBaby.com as either a CD or Download.
Posted by Wildy at 6:10 AM