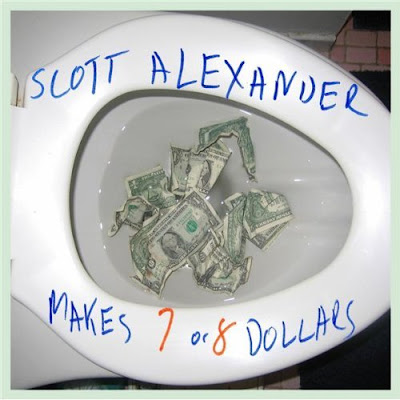 Scott Alexander is back. The Minnesotan-turned-New Yorker came to our attention back in 2008 with his EP Scott Alexander Makes Friends. His observational pop poetry lends itself to humor as Alexander embraces the uncomfortable in his songwriting, but jokes are not his forte. He has been known to give away cookies at his performances, as well as at random spots around New York City from the comfort of a green inflatable couch. Alexander doesn't desire fame so much as the ability to make a living as a free-lance bohemian troubadour who earns favor and derision in equal measure for pointing out the more vulnerable aspects of human sociology in song. Alexander at least gets the effect right on Scott Alexander Makes 7 Or 8 Dollars, the home-cooked EP that precedes the professionally groomed LP Scott Alexander Makes A Big Deal Out Of It.

Scott Alexander Makes 7 Or 8 Dollars opens with "Let's Go Shopping", a brief musical sketch that attacks consumerism and its role as a de-facto replacement for substance in human existence. The song is straightforward nearly to the point of crudity; while Alexander isn't exactly known for subtlety, he is generally a bit more deft at making his points than here. "Penny Gumball" is an existential look at the right to exist as we are, done as a musical ode to the gumball. Guest vocalist Jessica Teague puts a nice shine on the song with a pleasing voice we'd like to hear more of, and the song is more in line with what you might expect of Alexander. "First Class" is a song about the slippery slope of upward mobility to someone with historically proletarian mores. Class anger gives way to envy with self-admonishment in a characteristically funny-but-not-trying-to-be fashion.

"$20 Bill (Old Dickory)" is a vitriolic attack on the character and person of former U.S. President Andrew Jackson. The song is downright funny both for the active anger for a revered historical figure and the highly personal nature of the effrontery expressed. Alexander pulls a clever turn with the cover of Neil Diamond's "Forever In Blue Jeans", a moderately interpretive but generally faithful rendition of the classic tune. It's not what you might expect out of Scott Alexander but it works very well for him. Alexander closes with "You Are Not A Market", returning to the consumerism concept he opened with while deriding our cultural institutions for instilling in us a need to consume and be sold. The tune is a bit rough; full of a viable anger that burns slowly and has no clear target but just won't go away.

Scott Alexander Makes 7 Or 8 Dollars is eclectic, much like reading the personal diary of a thoughtful and mildly deranged person who actually thinks and cares about the world around him. The songs on Scott Alexander Makes 7 Or 8 Dollars tend to the funny, irreverent side of the spectrum without trying to be funny (irreverent is another matter altogether). Scott Alexander writes songs full of naked emotion and vitriolic anger clothed in the colorful clothing of a children's show. It's not always pretty to a cultured ear, but the truth of Alexander's observations and emotions cannot be denied. If JD Salinger were still alive and played guitar he would vehemently deny being Scott Alexander.