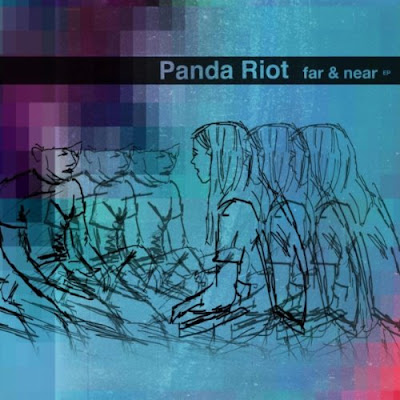 Panda Riot has been charming audiences with their brand of ethereal light-electronic pop in the Philadelphia/New York corridor for a few years now. Vocalist Rebecca Scott has a voice suited to the musical aether set to dance beats the band conjures, a subtle soprano that blends with the instrumentation rather than setting itself apart. Panda Riot will release their second EP, Far And Near, On May 11, 2010.

Far And Near opens with “Julie In Time”, an ethereal rock tune with blunted affect. The song is pretty and disjointed at the same time, as if The Bangles were writing songs with Brian Eno as their musical director. “Motown Glass” keeps with the ethereal feel and adds a psychedelic aspect with elements of dissonance in the harmony vocals and trippy beats. The biggest difficulty with Far And Near becomes quickly clear: The dynamic of Panda Riot never really changes on the EP. Consequently, much of the rest of the EP has a bland, marginal feel.

Panda Riot has a vocalist, in Rebecca Scott, who is something special. Unfortunately the arrangements on Far And Near never quite live up to Scott’s ability. Panda Rio has potential, but the energy required to bring that potential to fruition never fully materializes on Far And Near. The two opening tracks show a desire to stretch, but beyond that the reach falls short, and the listener is left with a promising product that never fully delivers on the promise.

Rating: 2.5 Stars (Out of 5)
Learn more about Panda Riot at http://www.pandariot.com/ or www.myspace.com/pandariot. Far And Near drops on May 11, 2010. You can pre-order the download from Amazon.com.
Posted by Wildy at 5:00 AM